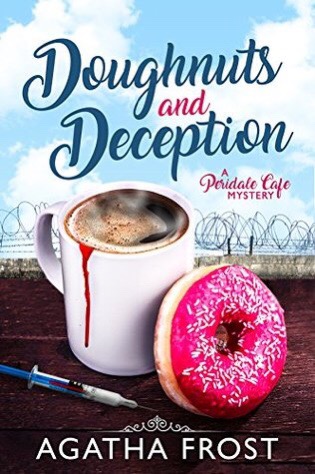 The 3rd book in the BESTSELLING Peridale Cafe Cozy Mystery series!
Julia never expected to be caught up in another murder investigation, but when she discovers that homeless people are dying suspiciously and the police aren’t investigating, she can’t sit back and do nothing. After promising her young lodger, Jessie, that she will do everything she can to help, Julia finds herself diving headfirst into the case, aided by her new Detective Inspector boyfriend, Barker. Sure there is a serial killer preying on the vulnerable residents of an old burnout warehouse, Julia must act quickly to get to the bottom of the mystery, but can she crack the case before more bodies turn up?
Book 3 in the Peridale Cafe Mystery series! Can be read as a standalone but will be enjoyed more as part of the series. A light, cozy mystery read with a cat loving and cafe owning female amateur sleuth, in a small village setting with quirky characters. No cliffhanger, swearing, gore or graphic scenes!

Doughnuts and Deception by Agatha Frost is another brilliant masterpiece. Julia is a baker but also one of the best ameature sleuths ever. She practically does the entire police force’s work for them. And not a single officer believes her when she’s informing them about a new case and why they should investigate it. However, there’s one investigator on her side…Barker. He’s completely fallen in love with the stubborn, brace, and smart Julia. Julia also likes Barker just as much. Julia’s gran is crazy but hilarious as well. She ‘spies’ on Julia and Barker as they do things and speaks her mind like no one else I know. Caring, sweet, but crazy older lady. Then, there’s the adoptive teenager, Jessie. Jessie was homeless until Julia took her under her own roof. Both Jessie and Julia are good bakers.

In this latest piece, the main characters are taken into a string of murders deemed as ‘not murdered’ and the police won’t take interest. These murders involve mostly homeless men. Men that Jessie knew when she was homeless. Jessie takes the murders to heart….and Julia can’t help but to dig into the mystery. Then, there’s Barker who will have to stick with Julia if he wants her to be safe…but his career and everything else might be jeopardized…overall, Doughnuts and Deception is another highly engaging and well-told story. Agatha Frost has once more caught my full attention and my heart with her new book. I highly recommend this read to all.