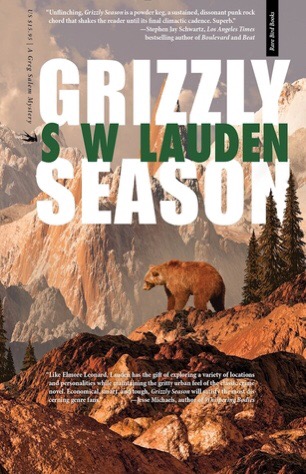 The highly anticipated follow-up to SW Lauden’s Bad Citizen Corporation, former Los Angeles police officer Greg Salem and his sidekick Marco escape to a remote cabin in the backend of the Angeles National Forest, only to have their peaceful retreat upturned after stumbling across the marijuana farm operation called Grizzly Flats. When the drug lord Magnus Ursus’ latest marijuana crop leaves Greg’s hometown and closest friends in disarray—setting off a series of explosive scenes including high-speed motorcycle chases, violent porn shoots, high-altitude gun fights, Mexican drug smuggling and murder—Greg is forced out of retirement to avenge his home and save the lives of those closest him.

Grizzly Season by S W Lauden is an exciting adventure. This book has trouble all over it. Inside, I found a retired police officer forced out of retirement because of a lot of mayhem happening within his hometown. A drug lord operating a marijuana farm leaves around a lot of violence. From shootings to car chases, the main charcater, Greg Salem, will have his hands full. Murder investigation and criminal activity makes this a heart racing read. Panic, fear, and deadly situations on every page. I’ve found Grizzly Season to entertaining. Suspenseful and well-developed. Overall, I recommend this hard-billed thriller by S W Lauden to all.