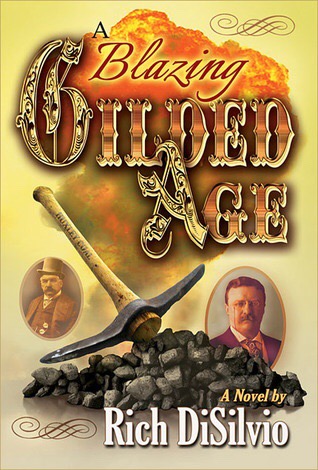 A Blazing Gilded Age is the epic story of a volatile nation burning with ambition, yet bleeding with injustice. It was a time of profound change; boldly transforming from an agrarian backwater into an industrial powerhouse.

Center stage in this turbulent saga, are the Wozniaks; a poor coal mining family struggling to achieve the elusive American dream. Confronted by the evil ways of their ruthless and depraved boss, Archibald Desmond Huxley, the Wozniak family is thrust into utter turmoil, thus igniting a blazing journey of revenge and survival.

During the Wozniaks’ quest, the lavish lifestyle of Huxley and his fellow titans, including J.P. Morgan, Carnegie, Vanderbilt, Teddy Roosevelt, Mark Twain and others, are woven into the story line, thus painting a broad and vivid canvas of 19th century America. Springing to life are legendary figures and historic events that accurately depict an era boiling with bravado, innovation and astounding progress, yet blistering with corporate greed, class warfare, and political corruption. After many unexpected twists of fate (some fortuitous and others heartbreaking), the Wozniaks emerge victorious, thus finally achieving the American dream, yet not without scars.

Both powerful and poignant, “A Blazing Gilded Age” serves as an entertaining and enlightening read of how and why America has gone astray, and why it became a world leader. While on a personal level, it imparts the harrowing, yet triumphant, tale of a family’s struggle to survive in an age that, in many ways, was as dark and rough as coal, and, at times, could be as blazing as Hell.

A Blazing Gilded Age by Rich DiSilvio is a talented writer. His characters both big and small came alive on the pages. The plot was deep, heartfelt, and thorough. History mixed in with fiction. Made this a new favorite. America wasn’t always great…a lot of bad went with the good. Here, inside this tale, I got to explore the depth in which Americans suffered. Suffered for survival. Power, greed, corruption and progress we’re just several themes mentioned in the book.

One particular family of low class is mentioned in great detail. They’re not famous. They work like slaves. Slaving for the bigger guys. Hard labor, suffering, and agnogy just to make a few pennies to survive…barely surviving. A Blazing Gilded Age is dark, haunting, and heartbreaking. Child labor, poverty, and loss are featured here in great detail. I felt like I traveled back in time to the late 19th century. Overall, Rich DiSilivio’s latest book is a must read for all. I highly recommend it.