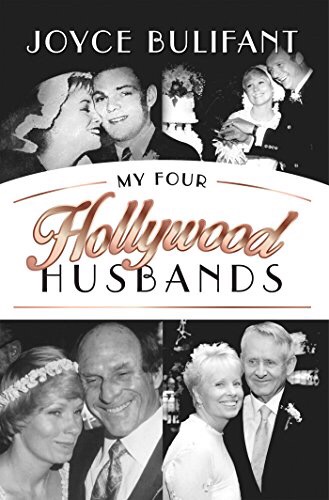 Joyce Bulifant has lived the “Hollywood life” for nearly seven decades, and through it, experienced what few outside the entertainment world can imagine. While following the path of her own successful career, Ms. Bulifant managed to navigate the choppy waters of husbands’ alcoholism, codependency and an extended family of four marriages.

James MacArthur played Danno on Hawaii Five-0. Edward Mallory was Dr. Bill Horton on “Days of Our Lives.” William Asher was the famous director-writer-producer of “I Love Lucy”, “Bewitched” and the Beach Party movies. Roger Perry starred in “Star Trek” and over 300 TV shows and films. He has also composed music for Barbra Streisand and Bing Crosby.

Along the way Bulifant managed to command the spotlight for her own accomplishments. As Gavin MacLeod’s wife Marie on “The Mary Tyler More Show”, a concerned mother in the movie “Airplane”, dancing with Fred Astaire, and her reoccurring role on “The Match Game.”

My Four Hollywood Husbands is a rare peek into what happens off the screen. It’s a story of love, a lasting love that is woven through the fabric of the world of entertainment. It’s also a story about perseverance and overcoming obstacles—and that happy endings are indeed possible.

My Four Hollywood Husbands by Joyce Bulifant is a memoir that shows how alcoholism can affect the individual and their loved ones. This, was a bit tough to read, because someone I knew died from alcoholism. It’s a real part of life. Scary when it happens someone we all know. The struggles are hard.  The entire book gave an insider’s view to this difficult journey. I also showed the consequences of the alcoholic’s actions on others close to the alcoholic. Then, there was the hope of getting through the addiction. Struggles are a part of life. We just have to battle them, until we get to where we need to be. I liked how Joyce Bulifant demonstrated this in her writing. Overall, My Four Hollywood Husbands is a great read. It’s an eye opener and one that I recommend to others.