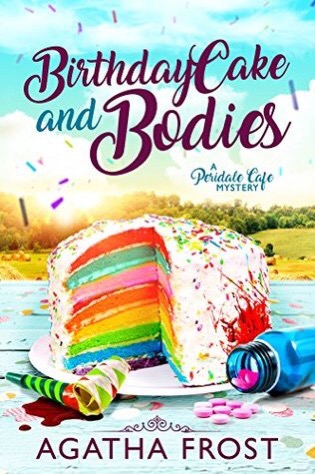 When Julia plans a surprise birthday party for Barker to finally meet his family, she did not expect that party to end in murder! With Barker’s three brothers in the frame, Julia is torn between respecting the man she loves, and her need to investigate! Will Julia be able to uncover the dark family secrets that lie at the heart of cracking this case without leaving behind a trail of destruction?

Birthday Cake and Bodies (Peridale Cafe Mystery #9) by Agatha Frost is the most exciting tale yet! Inside this book, readers get to follow the baker, Julia, as she plans and prepares for Barker’s surprise birthday party. For the party, Julia has gotten ahold of Barker’s family. They are coming to Peridale to celebrate his birthday. All should go well. But once they start to arrive, Julia is already regretting her decision for this party.
The family members are eccentric. They are more than dysfunctional. There are multiple affairs happening within Barker’s strange family. Anger, tensions, and hatred rise. Rising to the point, somebody is willing to kill for it.
But as always, the mystery isn’t cut and dry. One member killed a past relative. Creating a boiling point to snap among his brother. A brother who has blamed him for the death of his daughter. These two brothers are identical twins. But despite their looks, Julia, figures out how to distinguish them apart. That there helps her as she and Detective Barker investigate his family locked down in Julia’s father’s mansion. Someone is guilty and both are going to keep interrogating until they get their suspect. However, one death leads to another. The murderer thought the intended victim was gone. Only to discover the wrong person was murdered. Imagine the grief! Then, another body pops up…and it might not be too late for this new victim. Then, another family relative ends up almost dead. The same one who caused some of the trouble to begin with…but that’s not all. A member of the family is gay and hiding it for reason ps that are insane. Another is dating said gay person for the wrong reasons and two other relatives cause Barker even more stress by posting their troubles and mistreatment online. This all just adds to the craziness of the murder plot.
In the background, Julia is worried that this murder is all her fault. Jessie, Julia’s adoptive daughter, has broken it off with her boyfriend because she doesn’t want him to leave for the army. So, she’s struggling with the breakup…and then, there’s Julia’s stepmother who is in the said mansion where the murder occurred and is about to go into labor. Julia definitely has her hands full in this novel.
I loved it! Agatha Frost never disappoints. Her characters always bring out the humor, romance, and drama that makes this a spectacular read. There was never a dull moment. So many suspects and so many details that it might be hard for Julia to solve…overall, I highly recommend this book.