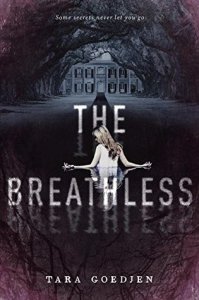 No one knows what really happened on the beach where Roxanne Cole’s body was found, but her boyfriend, Cage, took off that night and hasn’t been seen since. Until now. One year—almost to the day—from Ro’s death, when he knocks on the door of Blue Gate Manor and asks where she is.

Cage has no memory of the past twelve months. According to him, Ro was alive only the day before. Ro’s sister Mae wouldn’t believe him, except that something’s not right. Nothing’s been right in the house since Ro died.

And then Mae finds the little green book. The one hidden in Ro’s room. It’s filled with secrets—dangerous secrets—about her family, and about Ro. And if what it says is true, then maybe, just maybe, Ro isn’t lost forever.

And maybe there are secrets better left to the dead.

The Breathless by Tara Goedjen is a dark interesting read. The pages are deep and spooky. The plot was okay but it dragged a lot to me. I felt like I was going slow pace in a creepy horror film. This novel, was originally intended to be a suspense title. Yet, it wasn’t. Many explanations for things were left out completely. Plus, the scary factor was turned up full notch. Dark magic, Gothic mystery, and secrets that will entice readers every time. I was curious. My curiosity got the better of me with this read. It was good but could have been written better in my opinion. The characters were mysterious. Nobody but one person knows the real answers. Then, a book provides some interesting facts…and it’s like things may fall into place after all. But then, like I said, some more explanations were needed in several spots. I wasn’t sure of some things. Overall, this was an intriguing yet dark tale. If you’re a fan of Stephen King, the scary factor of this book would be your fit.