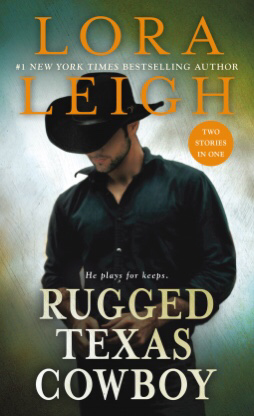 COWBOY AND THE CAPTIVE

Melina is one of two gorgeous twin daughters, the clever and considerate one who always spared her parents the humiliation of what her sister Maria had wrought. But now, Melina is finally ready to stand up for herself and seize control of her life—until she is kidnapped by a cowboy, named Jardin, who is dead-set on settling the score with her family. There’s only one catch: In capturing Melina, this tough, rough, hunk of a man has actually found a way to unleash her greatest fantasies, body and soul. . .

COWBOY AND THE THIEF

Beautiful, spirited Angel Manning has always longed to experience the power of her ancestors’ most precious heirloom. Her mother once told her that the legendary Irish torque would lead Angel to the one man worthy of possessing her heart. But when Angel learns that her father, now a widower, has sold the torque to the notorious two-timer Jack Riley, she is furious. Of course she plans to take back what is rightfully hers, by whatever means necessary. But the fate of the ancient Druids works in mysterious ways. . .Could it be that this slick, smooth-talking cowboy was destined to satisfy Angel’s deepest desires all along?

The Rugged Texas Cowboy by Lora Leigh is an interesting collection of two novellas. I found myself blushing, laughing, and enjoying the characters’ as they developed. Heat is sure to be found here, as well as intrigue. Both stories were realistic. I found myself feeling frightened, worried, and happy for Melina in the first tale. The woman in the next one, Angel, is just as tough as the first one was. I loved how Lora Leigh captured these women and made them feel so real. Their heroes were believable, too. Tough, cocky, and sexy these men would make any woman faint on site. They weren’t expecting the women they found yet once they met, they couldn’t let them go.

Cowboy and the Captive was about a young twin sister whose parents never loved her. She was the good twin. Yet her parents were obsessed with Melina’s evil twin. The evil twin had both her parents hooked on her finger. Melina was harassed into accepting jail time for her twin sister. Now, after another bad time, Melina’s parents are asking her to take the rap once more for Maria. Melina was brutally tortured and raped in prison for taking the rap for her twin the first time. Her parents weren’t there to help her nor did they care. All they are about is the drugged up, no good daughter…and when Melina is kidnapped for her safety…her evil twin goes in search of her. To have her serve another prison term while she goes free again…only Maria wasn’t counting on two cowboys…especially, on Luc. Luc would give anything to keep Melina safe. She was his. Sweet, compassionate, and sexy as hell. Melina and Luc have a connection. He’ll fight like hell to save her.

Cowboy and the Thief is full of fiery heat. A woman who can level any man. The heat the comes off the pages is intense. Both feel a pull but due to the cowboy’s reputation, Angel doesn’t want anything to do with Jack. Jack is a love them and leave them kind of cowboy. Until he meet one woman he can’t stop thinking about…Angel. Angel and her Irish language and charm have Jack wanting her more. She wants a happily ever after…and Jack wants only a one time fling. Fun, intense, and charming. Lora Leigh has presented her hero, Jack, with a female that matches his compassion and challenges him as a man. I loved the playful banter between the two protagonists. Overall, The Rugged Texas Cowboy is a must read. Strong female characters with matching male protagonists. Hot, hilarious, and thrilling to read. Lora Leigh has always been one of my favorite romance novelists. In this book, readers can see why. Her teasing words, vivid scenes, and intensity of curiosity sucked me into this collection. The characters…are ones that tugged at my heart and made me smile throughout the pages. I highly recommend this contemporary romance to readers everywhere.