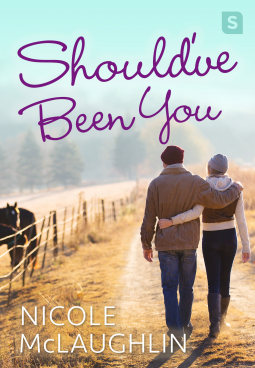 Childhood neighbors get a chance at love in Should’ve Been You, an achingly romantic novella in Nicole McLaughlin’s Man Enough series!

National Guardsman Jase Beckford wants to live a quiet life raising cattle and taking care of his mother. His childhood friend and neighbor Hannah is still his best friend, but when he walks into the Walters house one morning and sees her twin sister Becca for the first time in five years, he wonders if he missed out on something special.

Becca Walters has nursed a secret crush on Jase since childhood, but he always preferred Hannah, so she buried her feelings assuming her sister and Jase would one day turn their flirtation into a real relationship. And this Christmas, she is anticipating a proposal of her own, so Jase’s reappearance in her life doesn’t mean anything. Much. Okay, maybe more than Becca would like to admit.

However, when Becca’s sister gets engaged to someone who’s not Jase, Becca and Jase find themselves spending more together. And when secrets are revealed, suddenly those dormant feelings come back to life; but is the possibility of something between them worth risking the happiness of everyone they love?

Should’ve Been You by Nicole McLaughlin is a realistic story. I can actually see these characters as if I were watching them in real life. Their personalities are likable, their banters are funny, and their chemistry is heating up the pages. Old crushes and secrets are revealed. These lead up to an interesting plot and amazing scenes. I couldn’t get enough of Jase and Becca. Even Becca’s dad was lovable! Happiness might be closer than either main protagonist originally thought.

This, was my first Nicole McLaughlin book and I loved it. The writing sparked my interest immediately. This writer, knew how and where to draw my attention. The humor, romance, and heat was in full volume in this title. I couldn’t stop reading it. I laughed so hard, and I rooted for the characters. The story was a second chance at finding love…a love that was there deep down but somehow hid itself between the characters. Overall, I recommend this stunning read to all.