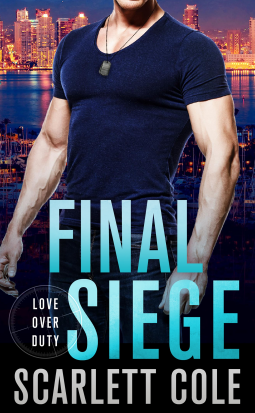 IN THE LINE OF FIRE.

Former SEAL Malachai “Mac” MacCarrick is all about the future he’s created with his Navy brothers in Eagle Securities, taking assignments in the most dangerous places, and doing things no one but ex-military would attempt. But when an urgent phone call brings his troubled past—and the woman he once loved—into the present, it’s a chance to redeem himself that he can’t refuse.

An investigative journalist researching an explosive story, Delaney Shapiro tells herself she got over Mac—and his role in her brother’s death—a long time ago. But the first moment she sees him at her bedside in an overseas hospital, she knows it’s not true. Every moment together rekindles the desire that once burned between them, and now that she’s a target for an emerging Russian arms dealer, Mac won’t let her out of his sight. To protect her, he’ll risk it all—including his life…

Final Siege by Scarlett Cole is a sexy as hell kind of read. One that gets hotter with every page. This, was my first novel that I’ve read that was written by Scarlett Cole. She is definitely going on my favorite authors list to watch out for…I was in love with this plot. Juicy details packed with heat, danger, and risks.

Old flames reuniting after a terrible death. The loss of a brother/best friend. A sister who hated the man she loved thinking he pushed her brother to his death. A best friend who has felt guilty keeping the secret for his dead friend. Not wanting to tarnish the friend, Mac looses the only girl he cared about…Delaney.

Both protagonists risk their lives daily. Delaney is a journalist who was severely injured after going through an assignment. Yet she still isn’t going to quit…and her work ends up bringing her back to Mac…Mac is a former seal who now has a company with his former seal friends. They go around doing tough assignments that may be their last trip. Mac ends up finding Delaney in a German hospital where she was asking for him. From there, Mac vows to never let her go…

Their flames ignite every time they’re around each other.

And it’s only a matter time…

Overall, I loved reading this book. I would highly recommend it to all romantic suspense readers out there. Sexy yet sweet. Both are a heady combination. Scarlett Cole’s writing baits, lures, and hooks in readers like myself. It was everything I hoped it would be plus, some.