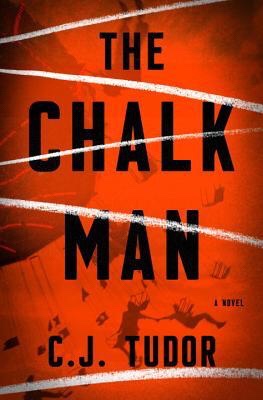 In 1986, Eddie and his friends are just kids on the verge of adolescence. They spend their days biking around their sleepy English village and looking for any taste of excitement they can get. The chalk men are their secret code: little chalk stick figures they leave for one another as messages only they can understand. But then a mysterious chalk man leads them right to a dismembered body, and nothing is ever the same.

In 2016, Eddie is fully grown and thinks he’s put his past behind him, but then he gets a letter in the mail containing a single chalk stick figure. When it turns out that his friends got the same message, they think it could be a prank–until one of them turns up dead. That’s when Eddie realizes that saving himself means finally figuring out what really happened all those years ago.

The Chalk Man by C.J. Tudor is definitely for fans of J.T. Ellison and Stephen King. Dark, frightening, and nightmarish this novel left me wide awake at night. Imagine being young and carefree using chalk like any other child until tragedy strikes. From that moment onward, no one can rest. Out of nowhere, threats start coming in, danger is surrounding them, death hanging in the air…

Chalk seems like a dull innocent childish thing. Until, I read this book. After that I couldn’t shut off my imagination due to the vivid images of the words. Pages of suspense, intrigue, and a haunting air that never went away. It only grew stronger as I dug deeper.

The five friends were interesting to follow. Eddie aka Ed is the main protagonist. His friends and him start to receive chalk figures in the mail. Is it a bad prank or something worse? Panic grows among them. Fear escalates as the chalk figurines keep coming. C.J. Tudor has a way of making her characters alive. The plot was addictive. I had to find out why this was happening and what the end result would be. I was terrified and hooked. A mystery that went unsolved has a way of paralyzingly a group of friends until something is done about it. We all know, that with life, more bad things happen before they get solved, if ever…

Overall, I highly recommend this novel. I will definitely be on the lookout for the next book by this writer. C.J. Tudor has impressed me. The writing had me saying wow…every step of the way. I couldn’t stop reading it. The Chalk Man shouldn’t be read at night…just saying.