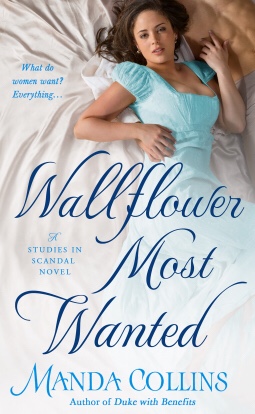 THE PICTURE OF ROMANCE

A dedicated painter, Miss Sophia Hastings is far more concerned with finding the right slant of light than in finding Mr. Right. But when an overheard conversation hints at danger for another local artist, Sophia is determined to get involved. Even if it means accepting help from an impossibly good-looking vicar who insists on joining her investigation—and threatens to capture her heart…

Reverend Lord Benedick Lisle knows that Sophia is no damsel in distress. But he won’t allow her to venture into peril alone, either. . .especially since he finds Sophia’s curious, free-spirited nature so alluring. But protecting her from harm is becoming more difficult than the vicar could have expected as he and Sophia confront their fiery mutual passion. Who could have known that the art of love would prove so irresistible?

Wallflower Most Wanted by Manda Collins is a page-turning Regency romance and part of the Studies in Scandal series.

Wallflower Most Wanted by Manda Collins is an interesting tale. This historical romance, brings out the most unusual characters for this genre. Beautiful yet exceptionally talented women who are looked at as strange among the society of their time period. However, their family and closest friends love them for who they are. Then, there are the men they meet…seduction, heat, and passion are mixed into the atmosphere creating a raw and unforgettable story.

The men can’t resist temptation in the form of the these exciting women. Strong, independent, talented and smart women…who know what they want in life. It was hard not to love the especially the main characters focused in this novel. Miss Sophia Hastings has been made an heir. Her talent is painting. She’s an outstanding artist that can make people think and feel what she has painted. I loved her fiery spirit. Her strong will and determination came from her Aunt who is a force to beware of…

Miss Sophia Hastings ends up injuring her leg and meets the dashing yet remarkable vicar in her area. Every lady wants to marry him. His good looks cause for the flock of women to surround him. Yet Miss Hastings isn’t flocking him despite how attracted she is to his looks and charms. When Reverend Lord Benedict Lisle pulls his full on charms, there’s no resisting him…

Reverend Lord Benedict wants to help people. He has no stomach for war yet he can defend himself and those he cares about…especially, the wallflower known as Miss Hastings. Both him and her suffer with the opposite sex coming to them for attention. Neither one enjoys this. Yet as their chance meeting happens, so does the danger. Over hearing a crime plot, both characters end up pulling closer than they ever dreamed. Maybe, they’ll find their match after all…unless the danger gets to them first.

Wallflower Most Wanted by Manda Collins is a super sweet, funny, and charming book. I couldn’t resist it. The temptation was too great. The characters were lovable. Each one had a personal connection to the situations happening and their personalities made the story that much better. It was believable. Manda Collins beautifully wove this tale into a romance unlike any other. Overall, I highly recommend it to all.