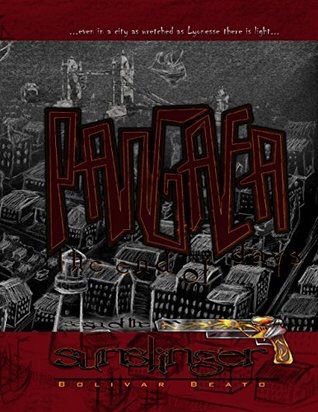 “Every now and then a Ranger, near the end of his life or edge of her sanity, enters Lyonesse in a last-ditch effort to bring a small measure of hope to the hopeless.

Predictably, their life span is short and violent.”

Lyonesse exists a lawless city under constant siege by malicious crime lords. It is a nexus point between Pangaea’s underworld and its elite, delivering both the best and the worst Pangaea has to offer a broken people. No one, whether Highbourne or Low, whether mortal or High Immortal, can escape the city’s darkness once it takes hold.

In that darkness a young Cougar seeks to shine a small light by helping those less fortunate. And with some luck, atone for past sins committed out of inexperience.

Her protector; an Elf whose past has left him defeated and whose boss seeks only to keep them both under his heel.

A terrible accident can either set them both free or see them forever ensnared, or worse…dead.

Pangaea: Saga of the Sunslinger by Bolivar Beato is a fascinating book. Inside are pages full of myth, fantasy, and paranormal themes. Each page was pure magic, events, wars, and other things. Detailed, carefully planned, and entertaining. The book held a intense environment…breaking into more intense moments. This book is definitely for fans of Stars Wars, Star Trek, Lord of the Rings and Dark Rage. The characters are a variety of beings. I loved the mixture. Made every moment interesting. I was deeply intrigued by the scenes. The story is complex. I also enjoyed the dialogue between characters. There was some humor that made me feel like I was transported into the book. Bolivar Beato is a talented writer. Creating worlds that captured my attention and held it until the end.