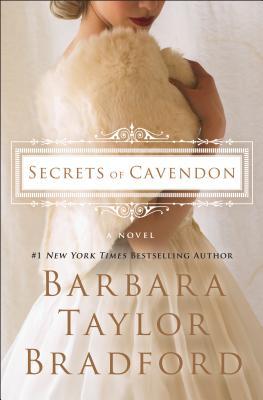 From the #1 New York Times bestselling author, a stunning, epic novel featuring the characters of the beloved Cavendon series.

For years things have run smoothly at Cavendon Hall, with very few quarrels, dramas, or upsets among the Inghams and the Swanns. But since the end of World War II, things have changed. The Secrets of Cavendon picks up in the summer of 1949, with the new generation of the estate at the forefront of the scandal and intrigue. With romance, betrayal, heartbreak, and possible murder threatening to tear them apart, the Inghams and Swanns will have to find a way to come together and protect each other in the face of threats they never could have predicted.

Secrets of Cavendon by Barbara Taylor Bradford is an engaging historical read. It’s similar to Downton Abbey. A big enormous place that is getting harder to keep up with…and families that have poured their money into keeping it alive. Then, there’s the secrets and history that are revealed. Plus, it too is set after the war. I enjoyed reading this novel.

As with all wars, things change. Drastic changes affect the Ingham and the Swann families. Finding ways to manage the finances and ways of the heart intrigued my attention. There was a lot of backstory and made this hard to get into quickly. I couldn’t move between pages that fast, because I needed to learn what was going on and who was involved with what.

The history of Cavendon is explored on these pages. Major themes of betrayal, romance, and heartbreak are incorporated into the tale. Some characters I enjoyed following more so than others. One of the ones I loved was Aunt Charlotte. She and Cecily Ingham had personalities that just drew me more into the plot. But others were not as captivating as them. There is a bit of mystery to follow here. Other than that it’s mostly a drama novel. So much drama within this book.

Overall, I was intrigued but bored. It has a historical slash women’s fiction genre to it. The strong characters were the females. The males seemed to be left behind mostly in the background of the story. Secrets of the Cavendon is good, but could have been better.