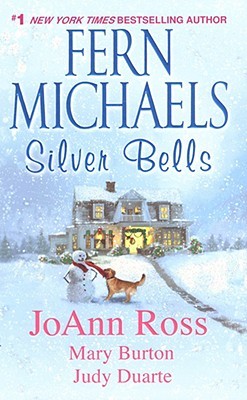 In the air, there’s a feeling of Christmas… so settle into your coziest armchair and enjoy four captivating tales that will make your holidays merry and bright…

For years, movie star Amy Lee wondered what it would be like to leave her shallow Hollywood life and go back home to Apple Valley, Pennsylvania. This Christmas, she plans to find out. And Hank Anders, her high-school boyfriend, is now ready to give her a welcome she’ll never forget…

Mystery author Holly Berry’s SUV has broken down in the little hamlet of Santa’s Village, Washington. Holly hates the holidays–that is until lodge owner Gabriel O’Halloran and his five-year-old daughter rekindle her belief in passion, magic, and Christmas wishes…

“Christmas Past” by Mary Burton

Photographer Nicole Piper just received a very unwelcome Christmas gift–a letter that holds clues to an elusive killer’s identity. Uncovering the truth means enlisting homicide detective David Ayden’s help, and embarking on a road trip that will take them both into the heart of danger and desire…

Every Christmas, the folks living on Sugar Plum Lane pull out all the stops when decorating. After a bitter breakup, Alyssa Ridgeway’s heart just isn’t in it this year. But running into her first love, James “Mac” MacGregor, fills her with memories of the tender Christmas kiss they once shared…

The first one depicted a woman who has grown tired of her high celebrity life and coming back home. Once there, she feels more like her old self and maybe finding a love, too.

Second tale, was about a woman writer who lost her belief in Christmas. She gets lost and ends up in the most Christmassy town that has ever existed. There she meets a sexy as hell man, divorced, and is raising his daughter. Maybe, she’ll find both a renewed hope in Christmas and in love.

Third story was about a woman whose husband was abusive slash obsessive over her. She finally left him, started a new life with her child, and gets involved into a dangerous situation. That’s where her friend who is a cop comes in to save the woman he cares deeply about…only she has to find the courage to be brave enough to love him back.

The last tale involves another woman but one who suffered heartbreak and betrayal from her husband. She has two kids and moved into her father’s house. There is a nasty mean old man next-door who seems to be grumpy and ridiculous to both her and her kids. And to add into the complications, her old romance flame lives nearby. Making it impossible to ignore their attraction.

Overall, these stories were believable, funny, and interesting. I was hooked. Each story had a great Christmas tale filled with hope, laughter, and love. Friendships and romantic entanglements were formed as well. I enjoyed following each of the characters as their journeys unfolded. I recommend Silver Bells to readers everywhere.