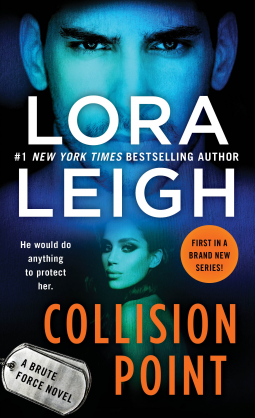 Riordan “Rory” Malone is a force to be reckoned with. A member of the Brute Force Protection Agency and an operative working with the Elite Ops, Rory is the fiercest of warriors and protectors. Honed from the strong Irish stock of their grandfather and sharpened to a razor’s edge, Malone men live for one single purpose: to protect the women who own them, body and soul. From the moment he saw Amara Resnova, he knew she could be that woman.

But Amara, daughter of an alleged notorious crime lord, is a force in her own right. When she betrays her father, she’s finds herself in the arms of a man who is dangerous for her body and soul.

Can Rory keep Amara safe while protecting his own heart? Can Amara trust Rory not to break hers even as the danger mounts, threatening to take them and their passion to a breaking point?

Collision Point by Lora Leigh is packed full of action, suspense, and heat. The sexy rollercoaster ride will not disappoint readers. The attraction is hard to resist between the protagonists. It’s realistic. Temptation, lust, and love is evident on every page. I also felt the fear, loss, and sadness as the plot swept me up into its world. Lora Leigh is a talented writer. I never wanted the book to end…

Riordan Malone is an interesting hero. A black ops guy who is also a cowboy. He became one woman’s bodyguard because he liked her. Not for the money. That made me love this man so much. He’s powerful, demanding, and all alpha. Hot, sexy, and dangerous. Cross him and death will come. Riordan fell fast and hard for Amara. She’s the daughter of a Russian crime lord. Amara almost died and Riordan was never the same again. Amara fills his dreams and thoughts everyday. Now, after six months, she finds him, asking him to protect her. And he does…

Amara is in danger once more. Someone has tempted to kill her several times, recently. All she remembers is Riordan. He vowed to protect her, and she feels safe with him. Amara was kidnapped and tortured almost to the point of death. Yet, here she is alive and trying to stay alive. She has no memories of of the abduction nor who or why someone wants her dead. All she knows is Riordan. Amara seeks him out for her protection against her fears. Something about Riordan has her feeling lustful and unbalanced. He makes her want things…but first, she must live long enough to survive.

Collision Point is exciting. I couldn’t stop reading this novel. Lora Leigh created characters that I fell in love with…I liked them all, even her over protective father who can be a pain in the ass at times. His love for his daughter is his most likable quality. And the alpha hero, Riordan is every woman’s fantasy. I loved his attitude! Overall, I highly recommend this romantic suspense to readers everywhere.