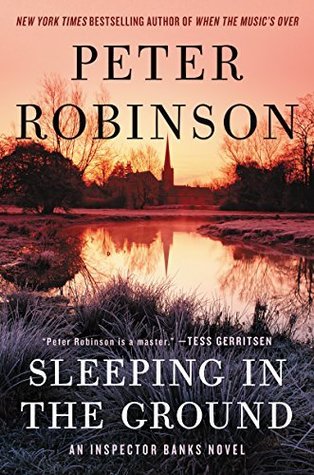 MICHAEL CONNELLY calls Peter Robinson “an author with amazing empathy, a snare-trap ear for dialogue, and a clear eye for the telling detail.”

See why in Sleeping in the Ground, the gripping new novel starring Alan Banks — featuring an opening scene you’ll never forget, and a finale you won’t see coming.

At the doors of a charming country church, an unspeakable act destroys a wedding party. A huge manhunt ensues. The culprit is captured. The story is over.

Except it isn’t. For Alan Banks, still struggling with a tragic loss of his own, there’s something wrong about this case — something unresolved. Reteaming with profiler Jenny Fuller, the relentless detective deeper into the crime… deep enough to unearth long-buried secrets that reshape everything Banks thought he knew about the events outside that chapel.

And when at last the shocking truth becomes clear, it’s almost too late.

Packed with twists and turns, heart and soul, this is another triumph from an author “at the top of his game” (LOUISE PENNY).

Sleeping in the Ground by Peter Robinson is an action packed thriller. There seemed to be an unsolved mystery and Detective Alan Banks is determined to find it and solve it. I enjoyed this character. His gut feelings and instincts are interesting to watch. Murder, secrets, and revenge cause for a great amount of intrigue.  My curiosity peaked. The plot went for steady to fast. The danger and risks built up as the detective and his partner dug further into the case.  Imagine one case leading to another sinister one. The way they all connected was creepy. The characters were believable. Everything felt real. The story was full of twists. That made it more engaging to read. It gave a realistic approach to the investigation and how the police procedures occurred. Overall, it was mysterious and entertaining. I would recommend it to readers everywhere.