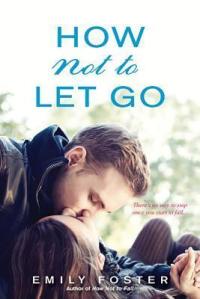 From the author of How Not to Fall comes an electrifying, powerful new story about love, trust, and emotional surrender.

Once upon a time, med student Annie Coffey set out to have a purely physical fling with Charles Douglas, a gorgeous British doctor in her lab. It didn’t quite work out that way. Instead, secrets—and desires—were bared, hearts were broken, and Annie knew she had to leave this complicated, compelling man who remains convinced he can never give her what she needs.

Walking away is one thing. Staying away is another. Annie and Charles reunite at a London conference, rekindling a friendship they struggle to protect from their intense physical connection. Little by little, Annie gets a glimpse into Charles’s dark past and his wealthy, dysfunctional family. Soon, she’s discovering what it means to have someone claim her, body and soul. And she’s learning that once in a lifetime you find a love that can make you do anything…except let go.

How Not to Let Go by Emily Foster is by far not the best novel I have read. It has the strong emotional attachment. Yay! But the characters…what in the world s going on? They find they are attracted as hel, to each other but one of them cannot accept the fact that love is indeed a thing. This male character believes he will lose the best thing that has happened to him and that being is the main character, Annie. Annie and Charles mostly have this weird as hell sex relationship. It feels like a tug and pull situation. Okay, have sex but afterwards go away from me kind of feeling. This situation keeps happening repeatedly throughout the book. I was confused as I haven’t read the first novel in this series. However, based on what I have read, I am happy I did not read the first novel. While I would love to give this book 4-stars for the sad yet intense emotional ride, I just can’t. The story was more a bad sex scene where the man manipulated his female girlfriend in both physical and emotional ways. For those reasons, I cannot connect to either character or feel for them. The entire time, I keep asking why is she interested in him, move forward, lady! The characters felt like two losers who were stuck on some form of attachment to each other and ended up bearing all abuse and emotions that they caused each other. It was just insane. A mad house, actually. I believe the author could have written a better book. It could have been epic. Yet, it was just intense, insane, and fluff. Overall, I would not recommend this book to anyone.