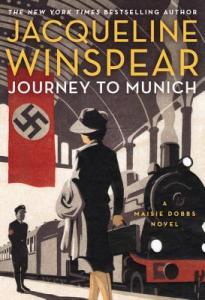 Working with the British Secret Service on an undercover mission, Maisie Dobbs is sent to Hitler’s Germany in this thrilling tale of danger and intrigue—the twelfth novel in Jacqueline Winspear’s New York Times bestselling “series that seems to get better with each entry” (Wall Street Journal).

It’s early 1938, and Maisie Dobbs is back in England. On a fine yet chilly morning, as she walks towards Fitzroy Square—a place of many memories—she is intercepted by Brian Huntley and Robert MacFarlane of the Secret Service. The German government has agreed to release a British subject from prison, but only if he is handed over to a family member. Because the man’s wife is bedridden and his daughter has been killed in an accident, the Secret Service wants Maisie—who bears a striking resemblance to the daughter—to retrieve the man from Dachau, on the outskirts of Munich.

The British government is not alone in its interest in Maisie’s travel plans. Her nemesis—the man she holds responsible for her husband’s death—has learned of her journey, and is also desperate for her help.

Traveling into the heart of Nazi Germany, Maisie encounters unexpected dangers—and finds herself questioning whether it’s time to return to the work she loved. But the Secret Service may have other ideas. . . .

Journey to Munich by Jacqueline Winspear is a historical novel that took me back to Nazi Germany. It would have been more beneficial to me, if I had read the previous books in this series. I would have loved getting to watch the main protagonist, Maisie Dobbs grow and work her way through each plot. This journey had its filling of danger, intrigue, and mystery. The focus was on the secret service and their recapturing of a war prisoner from Germany. This is where famous Maisie Dobbs came into the factor. She is sent to retrieve that prisoner being released from Germany.

Maisie Dobbs has worked as a detective and nurse. Her knowledge is great. She has been avoiding her family. Loss, grief, and moving forward are just a few of the things Maisie went through in this story. I was able to connect with the character. She was strong, determined, and restless mostly. Always needing something to preoccupy herself.

I enjoyed the historical time period and how it was captured for my entertainment. I felt like I did get sent back into time. However, the government spies and handling was strange. It didn’t feel like it was good representation of how they operated. But still, this was a work of fiction, and thus, it could be anyway the writer wanted it. The gossip and other minor characters were fun to follow. Priscilla is an interesting lady. I really liked her. She made me laugh and feel like I was right there the whole time. Journey to Munich offered action, adventure, and suspense. I was happy with the plot. It wasn’t fast-paced but it was steady enough that I did not give up on it. There were plenty of risk that made reading this novel worth it. Overall, I recommend it to readers everywhere.