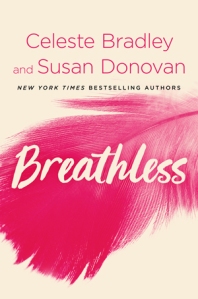 She was “the Swan.” London’s premiere courtesan. Men want to be with her. Women loathe her success and yet admire her beauty, her riches, her independence. But when the jealous wife of her lover moves to have the Swan banished from her home on the high seas, she winds up crashed against Spain’s rocky coast with no shoes, no clothes-and no name. Taken in by a tortured, sensuous man known as The Artist, the Swan comes to know the woman she wants to be—her artist’s siren.

When Art Professor Brenna Anderson is in danger of losing her post at Harvard, the rule-following, prim professor is at a loss of how to salvage the shreds of her life. But when a new painting in the mysterious Siren collection is discovered in a dusty old house in France, Brenna does the unthinkable—hops on a plane to uncover the identity of the beautiful, enigmatic woman who is the subject of the paintings.

There’s just one hitch—the frustrating, irritating, bold and beautiful art hunter, Fitch Wilder, is also looking for the Siren. He’s been a thorn in Brenna’s professional side for years, but when their individual quests lead them to team up despite being enemies, a whole new sumptuous world of art and culture opens up for the two of them. And with it, they enter a realm of passion and love…

Breathless by both Celeste Bradley and Susan Donovan is a book unlike any other. A contemporary romance that brings a story about erotic art paintings to life. In this story, I got to learn more about this modern like art that would appear to be just sexual in form to me. But to those who really know art, it really wasn’t about the sex appeal. It was more than just that. That’s where an academic woman scholar and a sexy male art hunter come together to find out more about The Swan paintings. These paintings have a story that needs telling. The art portraits themselves, sound so appealing and realistic that it was like being there seeing and experiencing what the characters got to experience firsthand.

Breathless is more than just a sexy romance that burrowed deep into my skin. It caught my attention and held it fast. The journey from the present to the past of the woman courtesan, who was painted as The Swan, was a woman who lived many lives. She had to find herself and that happened when she found and fell in love with the male painter. Following her historical journey from England to the Americas was fascinating. I felt disinterested as first, but after learning more, I could not stop reading.

The modern cast of characters include Brenna Anderson. She’s clever, gorgeous, and talented. Her former lover is an idiot and loses her by his betrayal. Then, there’s the work issues about the subject of art that Brenna is teaching to her students. Some parents who fund the art program were complaining about her choices. Brenna wanted to tell them to stick their opinions…but the university has its hands tied. And that is where her life journey begins…chasing after a portrait that may link The Swan series and letters to the life of the woman whose protairt is the talk of the century. But she might have to work with a man who defies what she normally trusts.

Fitch Wilder is the next modern day character who makes this a lot of fun to read. He was vibrant, sexy as hell, and adventurous. Sometimes he broke the rules but finding out more on the identity of the woman in The Swan painting was worth the risks. Even if the led him to the fiery yet most engaging woman he has ever met…Professor Brenna Anderson.

The Courtesean in the paintings somehow has brought two modern people together. Finding a love tha burns as deeply as the one she experienced. Love, sex, history, and art are all found in this epic tale. A journey of survival, loss, and new beginnings. I loved it. Overall, I would recommend this novel to all readers. It was the best thing that I have read in a long time.