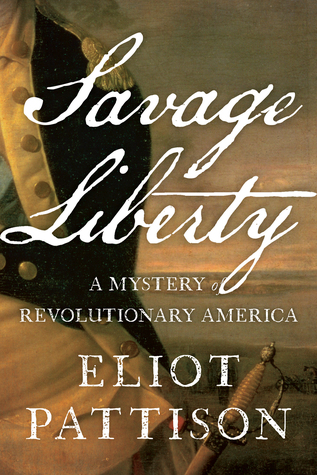 Acclaimed author Eliot Pattison continues his Bone Rattler series as Duncan McCallum is drawn into dark intrigue surrounding the Sons of Liberty in this gripping thriller set in the early days of the American revolution.

Pattison’s deep historical knowledge and attention to detail brings a young America to life, immersing the reader in the atmosphere and events that were to lead to the American rebellion. Protagonist Duncan McCallum is lead into a mystery of murder, treachery, and intrigue with Samuel Adams, John Hancock, and a secret society of American patriots organizing to resist the British throne.

Savage Liberty by Eliot Pattison is a novel that sent me back in time. I love following Scottish characters. I have never read a novel, where they were never not in trouble. There was always something going wrong to keep the action steady. Duncan MaCallum’s life was interesting. Death was constantly hanging over his head. Duncan is a strong, determined, and stubborn man. He appeared foolish but is not. He is braver than most men. His relationship with the strong-willed woman, Sarah, is beautiful. Both are good people struggling to survive in their new world. Boston was a place of danger, violence, and uprising. Duncan was smart to leave there but somehow it still chased after him. The time period was captured perfectly. Eliot Pattison created this story in way that deeply engaged me in all the characters’ lives. I felt as though I just lived through them all. Overall, I would recommend this to history fans and historical fiction lovers. This was fun to follow.