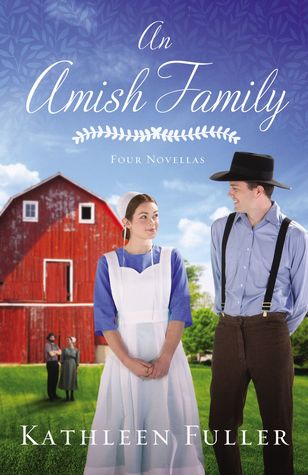 In An Amish Family, beloved author of Amish romance, Kathleen Fuller, invites readers into the lives of four Amish families.

Grace Miller and Joel King are in love. They’ve dated secretly for the past year and when he proposes marriage, Grace eagerly agrees. But when she tells her parents about the wedding, she’s shocked when her father tells her she can’t marry Joel. Can Grace get to the bottom of her father’s animosity toward Joel so they can have the happily ever after she’s always dreamed of?

A Heart Full of Love  (also in An Amish Cradle)

Ellie’s mother hasn’t stopped meddling in her personal life since Ellie lost her sight—and she’s taken it up a notch now that Ellie’s pregnant. When Ellie gives birth to twins, her mother insists on moving in to care for them. But when her mother’s behavior becomes unbearable, Ellie is forced to take a stand . . . and finally find out why Mamm can’t let go.

In a desperate move to evade her match-making mother, Emily Shwartz announces that she’s already seeing someone: Reuban Coblentz. The trouble is, Reuban is barely even a friend. Seeing how desperate she is, Reuban plays along. But when the past sneaks up on them, will this temporary arrangement turn into everlasting love?

A Gift for Anne Marie  (also in An Amish Second Christmas)

Anne Marie and Nathaniel have been best friends since they were kids. Now things are evolving . . . in ways everyone else predicted long ago. But when her mother suddenly decides to remarry in another state, Anne Marie’s new chapter with Nathaniel looks doomed to end before it begins.

An Amish Family by Kathleen Fuller is a wonderful anthology full of good Christian stories. Each story focuses on a lesson and they’re based on faith, love, and hope. Two of these short stories were previously published in other volumes. I enjoyed reading them all. They had a common theme and shared similar troubles. Love came in all many ways through each piece. Sweet, tender, and heartfelt…I felt a connection to all the of the characters. What I found most interesting what that in each new story, the focus on a female protagonist. Yes, there were strong male characters but it centered on the leading females. Everything they thought to what they did…moved the pages along. Overall, I found this collection engaging to read. I would recommend it to other readers.