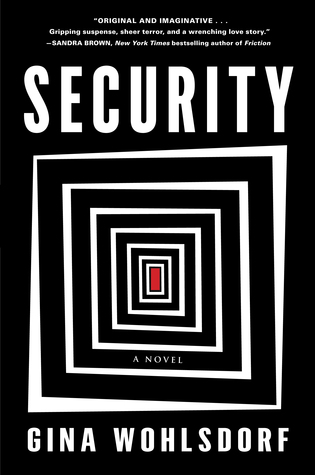 The terrible truth about Manderley is that someone is always watching. Manderley Resort is a gleaming, new twenty-story hotel on the California coast. It’s about to open its doors, and the world–at least those with the means to afford it–will be welcomed into a palace of opulence and unparalleled security. But someone is determined that Manderley will never open. The staff has no idea that their every move is being watched, and over the next twelve hours they will be killed off, one by one.

Writing in the tradition of Edgar Allan Poe and Stephen King, and with a deep bow to Daphne du Maurier, author Gina Wohlsdorf pairs narrative ingenuity and razor-wire prose with quick twists, sharp turns, and gasp-inducing terror. Security is grand guignol storytelling at its very best.

A shocking thriller, a brilliant narrative puzzle, and a multifaceted love story unlike any other, Security marks the debut of a fearless and gifted writer.

Security by Gina Wohlsdorf is an entertaining yet deadly mystery. It kept me guessing. The scenes where it was so obvious that someone did something that couldn’t be brushed off was overlooked. I wondered what would have happened, if the blood scenes were checked and inspected. How many times the hints of something darker were present yet ignored. The intrigue built with every page. Made me curious as a cat. Every moment a murder has been committed it’s been shrugged off by the sheer visibility due to a reasonable excuse of what it could have been. My questions were, wouldn’t a sane person look further into the blood scenes, who was injured, and how did it happen unnoticed? Yet the characters who noticed something did not take it further which added to the intensity of the severe situation. A murderer was loose and able to kill everyone without a single disturbance. Gina Wohlsdorf’s writing caught my eye and kept me reading. I love a good mystery and the frightening story of being watched by someone unknown was creepy as hell. Overall, I recommend this novel to all.