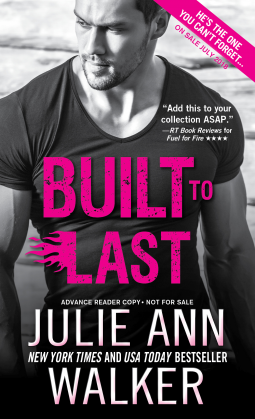 Masterful, mysterious, and completely ruthless, Jamin “Angel” Agassi joined the Black Knights Inc. after a mission-gone-wrong forced him to undergo extensive plastic surgery and change his name. He’s going to bring down the world’s worst crime syndicate, and hopefully keep Sonya Butler, a love from his past, from discovering who he really is…

When a dark-eyed stranger gets caught up in Sonya’s latest mission, she starts to question all her hard-won instincts. Something about Angel tells her he’s more than he seems, and sometimes, when she least expects it, he reminds her of a man she used to know. As the bullets fly, she realizes that in love and war nothing is ever what it seems…

Julie Ann Walker’s latest novel, Built to Last, is one hell of romantic suspense tale. Inside, I got to follow a strong yet determined man to bring down an evil force. But in doing so he loses his identity and goes undercover. However, he’s not the only one…his former love, Sonya, does the same thing. Thinking she lost him, she went undercover to bring down the bad guys. She still loved Angel. Angel has not forgotten her either and is doing all he can to accomplish his mission, keep his love safe, and get them out of there alive.

I immediately got lost within this world of fiction. Built to Last, is one emotional journey that I won’t ever forget. The characters were so real. Charming, strong, and clever…it was hard not to love them. The book’s title described Sonya’s and Angel’s love perfectly. Despite the danger, the risks, and the final outcome-whatever that will be-their love remained intact. Priceless…a romance that wrapped its way into my heart and pulled me deep into its fast-paced plot. This read had so much action and surprises, I was constantly guessing. Overall, I highly recommend this hot book to readers worldwide.