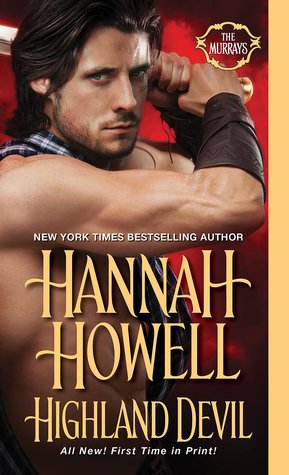 When a red-haired woman tries to steal Sir Gybbon Murray’s horse on his journey back to the Murray stronghold, he thanks his lucky stars that his horse is a rude lout—and that the pretty thief is not so injured that she can’t tell her tale. He’s no nursemaid to delicate lasses, but Mora Ogilvy is fleeing her ruthless cousins, fearing for her life. And when she tells him of the home they’ve taken from her and the man they say she murdered, Gybbon cannot let such injustice stand.

Mora’s pride demands she take back her lands, but not by risking the lives of this handsome, wicked knight and his family. Still, she needs to recover from her wounds, and staying close to Gybbon in his brother’s keep is a seductive solution. A few weeks at his side will be a sweet memory for her when she returns to fight her own battles. Except the depth of her cousins’ treachery—and the fierceness of Gybbon’s love—may turn her own heart against her plans.

Highland Devil by Hannah Howell is an interesting tale. One where family is set against its own. An evil cousin is set upon killing everyone to get what he wants. And no one has been able to stop him yet…even his own father won’t stop him. That’s when Mora and her younger brother, Andrew, flew for their lives. Their paths soon cross that of one brave highlander, Gybbon. Gybbon immediately seeks to help Mora and her brother against her evil cousin. But the fear, danger, and passion that sparks between keeps them at ends.

The suspense in this historical novel was intense. I was not sure what would have happened to Mora. Several times, I thought both she and Andrew would die. As for her older brothers…I did not see that unexpected twist happening. Fast-paced and brilliant, Hannah Howell plucked my curiosity and kept it. I would recommend this read. It was deeply engaging and emotionally fun to follow. Brave, funny, and strong men racing to help those in danger made my heart melt every time. Highland Devil is just as it sounded. A highland devil was detailed here. Running and finding out why the highland devil wanted the characters dead was a unique mystery. It appeared to be greed but I am still left with wondering if it was simply just because he was a mad man. Or was he?