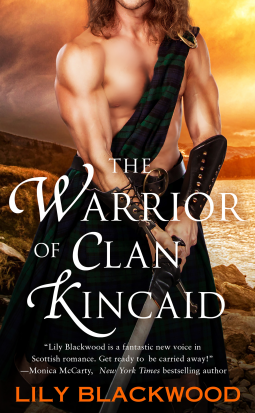 Derryth MacClaren is on the run—having been sent from her castle home to avoid capture by the vicious nobleman known as the Wolf, who has vowed revenge against the Clan Kincaid. When a surprise attack leaves her vulnerable, Derryth ends up in the hands of an enemy warrior who claims her, with the Wolf’s blessing, as his prize. But her captor’s gentle words and touch seduce her heart—and body—completely. . . and when she discovers the tattoo on his arm that proves him to be the legendary, long-believed dead son of the murdered Laird of Kincaid, Derryth knows she must find a way to alter his fate—and her own. . .

Cull has no memory of his family or past—all he knows is the life of a warrior, trained to fight on behalf of the Scottish king. But now that Derryth has informed him of who he really is—Cullen Braewick, the youngest son of the slain laird—he is torn. If Cull exacts revenge against the Wolf, who executed his father, he stands to lose the precious lass who he has come to love. What is he willing to sacrifice for Derryth to keep her safe. . .and in his arms?

The Warrior of Clan Kincaid by Lily Blackwood is one that I could not stop reading. The plot was intriguing from the start. I was curious about the the young boy who was a slave as a child and the spoiled young woman. How their paths crossed was a tempt of fate. In the previous plots before this one, readers are aware of the trouble from the villain aka Wolf. Wolf sought to destroy the Kincaid clan due to a personal feud. One that was his caused by his own doing. A woman scorning a man is seen repeated here. Yet there is much more to the tale than sympathy for the cast of characters.

Romance, action, adventure plus hot Scotsman are inside this book. I loved the heroine. She was a spoiled lady but willing to suffer for the ones she loves. Not wanting to leave her family behind, Derryth is sent away to prepare for her sister and husband to come over…yet, their plan goes bad. They traveled only a small distance before they are trapped. That’s where the tall, handsome, yet unemotional man awaits. Taking them prisoners. The banters between Cull and English Guard and the Scotswoman is fun to follow. I was laughing, and devouring up every detail. Overall, I would recommend Lily Blackwood’s novel to all readers.