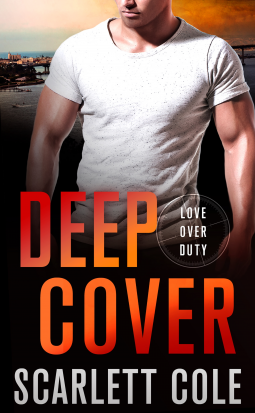 ARE THEY IN TOO DEEP?

Ex-Navy SEAL Cabe Moss always comes when called to duty―at all costs. Even though the death of his fiancée nearly destroyed him, Cabe won’t let his past interfere with any work that has to get done. When his latest task pushes him to team up with FBI Agent Amy Murray, a fierce beauty with the undercover skills to match, Cabe must admit that, for the first time in years, he wants to do more than just complete their mission together…

Amy was born ready for this assignment, but working side-by-side with the the strong, silent, and frustratingly professional Cabe seems to be the biggest challenge of all. But when the sparks begin to fly―and the stakes rise to dangerous heights―the only thing Amy is left worrying about is how she can resist him. Their lives may be in danger, but their hearts hold the biggest risk of all…

Deep Cover by Scarlett Cole is a sexy yet dangerous journey. Loss, grief, and moving forward after a death are commonly found here. I found them realistic, inspiring, and heart melting. The characters felt like I knew them forever. One character loss a loved one and on the two-year anniversary finds a woman who interests him. Instantly guilt hits him hard and he leaves. It isn’t until later that the same woman is working with him on the same op. That’s where everything rides like a roller-coaster from a theme park. A separation of work and love are seen on the pages. Also, there’s a hint of women harassment in the workforce dominated by males. I found it interesting.

Inside Deep Cover, I got to meet a Navy Seal who lost his love. Both him and his loved one were in the military and just started to get serious when he lost her. The loss has plagued Cabe ever since. He goes to work but is like a robot. Cabe keeps putting one foot in front of the other, until he meets, FBI Agent, Amy. Amy is a young gorgeous yet clever woman in a male dominated sector. She has just been sexual harassed by a senior male agent before meeting with Cabe. Cabe changes everything. He is nothing like the men she has worked with or met. He loves her intelligence and beauty. Both feel happy being near each other. However, Amy is on a deadly deep cover op that could go wrong any second. Cabe has to fight with letting Amy do her job as an agent while, doing is job to protect her. It’s a difficult situation for both of them. Yet Scarlett Cole made them so likable, I couldn’t stop reading. The intensity of their attraction and danger of the op made this a must read. Overall, I would highly recommend it to all romantic suspense readers.