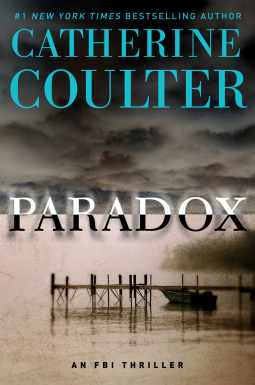 With unparalleled suspense and her trademark explosive twists, #1 New York Times bestselling author Catherine Coulter delves into the terrifying mind of an escaped mental patient obsessed with revenge in this next installment of her riveting FBI series. When he fails to kidnap five-year-old Sean Savich, agents Sherlock and Savich know they’re in his crosshairs and must find him before he continues with his ‘kill’ list.

Chief Ty Christie of Willicott, Maryland, witnesses a murder at dawn from the deck of her cottage on Lake Massey. When dragging the lake, not only do the divers find the murder victim, they also discover dozens of bones. Even more shocking is the identification of a unique belt buckle found among the bones. Working together with Chief Christie, Savich and Sherlock soon discover a frightening connection between the bones and the escaped psychopath.

Paradox is a chilling mix of Dr. Jekyll and Mr. Hyde, old secrets that refuse to stay buried, and ruthless greed that keep Savich and Sherlock and Chief Ty Christie working at high speed to uncover the truth before their own bones end up at the bottom on the lake.

Paradox by Catherine Coulter is a thrilling race to catch a murderer before it’s too late. Two agents wake up to find their son being threatened by an unknown man in a mask. The man escapes from them. But his threat leaves behind a mass of fear and a start for a new investigation.  Little do they know his tie to a bigger and former case will be connected. Until then, they have to be faster and outsmart their enemy.

Catherine Coulter creates a suspenseful new tale in Paradox. Immediately, I connected with the agents. Their level of protection for their son was amazing. Being in their field of work, it is understandable to have such security and plans made. It worked. Their plans gave them the alert and saved their son’s life. Their young son is clever for his age. There was a hint of Winnie the Pooh bear somewhere in the boy’s room, which suggested he was still pretty young. But like his parents, he came to the conclusion of what really happened. His parents couldn’t lie to him. I liked that. It made the situation realistic. Then, there was the chase after the criminal and the procedures of starting an investigation. I felt like I was there watching and participating with the agents. The pacing of the plot was quick. I just kept on reading chapter after chapter. My attention was fully caught with this novel. A thriller with enough action and intrigue to keep me reading. Overall, I would recommend it to all fans of Laura Griffin, Heather Graham, and Criminal Minds.