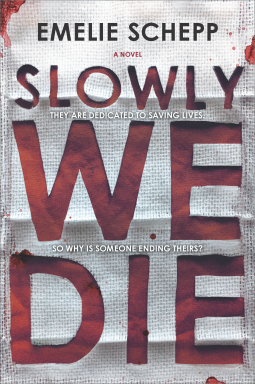 An accidental slip of a blade…Then murderous revenge…A patient’s accidental maiming leads a young surgeon to abandon his profession…Now, ten years later, a series of gruesomely senseless murders are rocking the medical community. The weapon? A surgical scalpel.Who is preying on these victims? What does the grisly pattern reveal? And who will be next? Special prosecutor Jana Berzelius is in charge of the investigation. What she can’t know until finally closing in on the murderer is how her own mother’s recent death is intimately connected.

For fans of Tess Gerritsen and Patricia Cornwell, an intricate medical thriller that keeps everyone guessing. 2017 SWEDISH CRIME WRITER OF THE YEAR’Schepp may be the smoothest storyteller among the new crop of Nordic noir aces…the ingenious plot reveals and hidden connections keep you glued to the action.’ – Kirkus Reviews

Slowly We Die by Emelie Schepp is a frightening thriller. Imagine being locked in with an unconscious prisoner only to find him awake…the nurse dropped the needle. Her partner bent down to pick it up only to find her dead and the prisoner alive.

Death hung in the air on every page. The intensity of the increasing violence and the volume of people being murdered by a scalpel made my hair stick up. Then, I found out the main character, a prosecutor, may have a personal attachment to the case at hand. Freaky, deadly, and chilling…Emelie Schepp got the fear factor in full force.

The novel really went into depth on the strictness or lack of strictness in the punishments for prisoners. It also showed how some higher individuals also got lower to no punishment for their crimes. Unjust and quickly spiraling out of control, the justice system is sinking. People are scared. These issues are still a big problem to be dealt with…yet nothing got fixed.

How many people have to die before the justice system is fixed? And who is behind all the killings? Is a less strict policy best for deals with criminals…like our prosecutor thought? Or was she wrong? Overall, I enjoyed reading Slowly We Die by Emelie Schepp. It definitely left me thinking hard on these subjects.