You Are a Real Character

A young teacher at a small town high school—married, in her 20’s, with aspirations to become a television journalist—was accused of murdering her husband.

In the weeks before her arrest, she appeared on television several times, making emotional pleas, asking anyone with knowledge of the murder to please come forward to assist the police in locating the person who had killed her dear, kind husband.

This is a true story that took place on the East Coast a few decades ago.  The killer turned out to be a 15-year-old boy from the school where the teacher taught, who said he was her lover.  He testified that she helped plan the murder, so it would look like a burglary.

Of course, everyone in the community was stunned.  Many said, “It was so out of character.  She was so nice and good.  How could she have killed her husband?”

My uncle Ted was not a big man, but he always bought shirts that were much too large for him.  He usually wore old baggy jeans and a cotton shirt that covered him like a gown.  If the wind blew brisk, the shirt would puff out like a balloon.

Whenever anyone asked him why he wore those big shirts, he’d say, “Small, medium, large, extra-large… all the same price.  I get more value for my money.”  He wore a medium, but an extra-large had more fabric, so instead of buying a medium, he’d buy the extra-large.

My Aunt May would say, with weary resignation, “Ole Ted Boy is a character, ain’t he?”

Cussing Helen and soft-spoken Wayne were the parents of a best friend.  Helen was a contractor and Wayne a caterer.  She built houses and he built wedding cakes.  People would often say, “Shouldn’t it be the other way around?” Meaning shouldn’t Helen be the caterer and Wayne the contractor?

These characters had been happily married for over twenty years.

One writer said, “In every novel I’ve written, I began with a character, and allowed the drama to emerge out of human nature and relationships.”

As a young girl, I recall being fascinated by people: how they dressed; how they talked, their choice of words; their beliefs and opinions.  I soon discovered that everyone—without exception—was a character, and I would write down aspects of their character in a notebook.

From a young age, I observed that people often say one thing but do another; that guilt can ruin an entire lifetime; that laughter often masks great pain.  I would ask myself, why?

Invariably, in my own life, I’ve learned that what people say about someone else usually says more about them than the other person.  I’ve learned that what people think will make them happy doesn’t, especially, if it’s obtained too easily.  Instead, they get disenchanted and feel the frantic need to chase after the next happiness.  (This can be a great driving force for an entire novel.)  I’ve observed that true happiness mostly comes from sacrifice, tenderness, patience, and a good sense of humor.

When I began writing novels, I learned that I could drop any flawed, colorful character into nearly any plot and the story would sail off and hold the reader’s interest.

So, I usually begin my stories with a character who is struggling with fate, a painful secret, or a buried fear.  In our latest novel, The Lost Mata Hari Ring, a Time Travel Novel, the protagonist is plagued by nightmares from a past life, which she learns are a consequence of painful events and bad choices that left her estranged from her daughter.  After our protagonist time travels and meets the love of her life, she must then face herself as she was in the past and reconcile with her daughter, so that she can move on with her life in the present.

I love writing about romantic discovery and relationships, where characters meet that special someone who attracts and challenges them.  Over the course of the story, it is the relationship that helps to change and expand the protagonist from a tiny bud into a glorious rose.  The once frightened, flawed character finally grows up and blossoms.  She doesn’t just find herself, but she is free to create a new and authentic life.

As the great playwright George Bernard Shaw said, “Life isn’t about finding yourself.  Life is about creating yourself.

A quote that I have never forgotten was one I first read in junior high school: 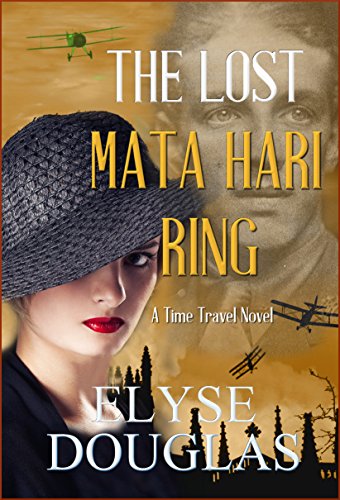 Up-and-coming actress, Trace Rutland, has had nightmares about a tragic past ever since she was a little girl. She struggles with her everyday life, finally seeking help from a hypnotherapist.

While under hypnosis, she inadvertently experiences a tragic past life in Paris, in 1916, during the First World War.

Later, while visiting a wealthy man’s private Mata Hari collection, Trace is drawn to a glittering ring, once worn by the convicted spy. Trace is enthralled. When she’s alone, she slips the ring on and is swiftly hurled into the past. There, she must face herself as she was in the past, while struggling to change the course of her destiny.

When she meets the handsome Edward Kenyon Bishop, a World War I British flying ace, she falls in love. She is swept away into a journey of suspicion and treachery, and must fight for her life.

Can she survive the past? Can she return to the present? Can true love endure for all time?

The Lost Mata Hari Ring is so much like The Time Traveler’s Wife. The plot is full of mystery, intrigue, and a bit of romance. There is plenty of action to follow. I was never bored. I am hooked. It captures my interest from the first chapter. Time travel that allows a young woman to find her past and move past her nightmares. This journey in time, gives Trace a new beginning and a sense of peace. I easily was swept into the story as I followed Trace reconnecting with her past life and accepting her present one. Trace is a strong character that was likable. I can connect with her without difficulty. Overall, I recommend this novel to all readers.

Enter to Win a Copy of The Lost Mata Hari Ring