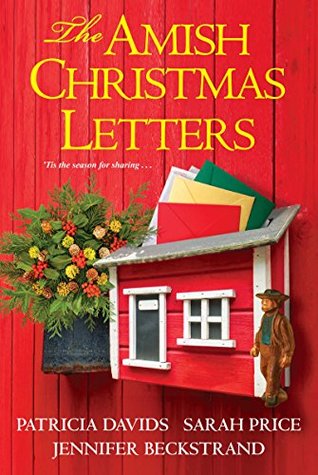 With Christmas around the corner, it’s time for Amish families to include holiday greetings in their circle letters, each writer adding to a growing collection as it travels on to the next. In this delightful trio of stories, three cousins scattered across the country share their blessings—and reveal news of romantic surprises . . .

To win a friendly annual competition, matchmaker Marybeth Martin must bring one more couple together by Christmas. Her only prospect is a man more interested in a nanny than a wife—until his little girl shows him the light. . . . Struggling farmer’s daughter Katie Mae Kauffman discovers that she and a local widower and father of four can harvest more crops—and profits—together than separately. But she’ll have to put pride aside to make room for unexpected love. . . . Corralling an unruly brood of seven is not babysitter Carolyn Yutzy’s first choice for celebrating the season—but the sparks between her and their unsentimental yet irresistible uncle may be a gift neither was counting on . . .

Now, one by one, each resourceful young woman will have a holiday to remember—and to write home about . . .

The Amish Christmas Letters is a heartfelt Amish anthology that swept me off my feet. I loved the characters.

Marybeth is a single Amish woman trying to win a bet from her cousin. The loser has to house their mean relative. Only this bet ends up leaving Marybeth falling deep in love with the man she’s helping. As she works as a nanny, Marybeth gets to know the man she’s setting up…maybe, she will end up winning the Christmas met in more ways than expected. The man she’s trying to set up with a date, is strongly against marriage. But spending more time with Marybeth, the idea of marriage starts to look better. Then, there’s her cousin Katie.

Katie is a young unmarried Amish woman. Her father had a stroke and that left everything up to Katie to do. Doing women’s work in the house and keeping up with the farm, proves to be more than Katie can handle. Her Bishop notices it and sets a plan in motion. Little does Katie, her father, and the man with his kids know, but all of them will end up helping each other. At first, their resist the help and each other. But with a little more time, they each start to see the other one in a new light. From sassy and strong willed to becoming more than friends, these two were fun to follow.

Last, there was Carolyn. She was blindsided into babysitting for seven unruly kids. This one touched my heart even more so. The kids were misbehaving constantly, yet as soon as the parents entered into the scene, it was easy to see why. The children wanted their parents’ attention. Neither parent was giving their kids any attention. Their mother ignored their bad behavior. Their father refused to believe his kids were being bad. Both parents were to blame. At first, the children’s uncle thought it was Carolyn’s fault.  Thinking she was a bad babysitter, the uncle tried to get her fired. But he was wrong. Carolyn gave the kids more attention and love than their own parents. Soon or later, the parents would have to do something…In the meantime, Carolyn and their uncle keep bonding over the mishaps. Maybe, they will get their Christmas gift after all.

Overall, these three stories were sweet. I couldn’t stop reading them. The plots were fast. Plenty of action, intrigue, and romance to keep me interested. Themes such as faith, family, and love were shown. Obedience and respect were other lessons in this Amish journey. I recommend this collection to all readers.