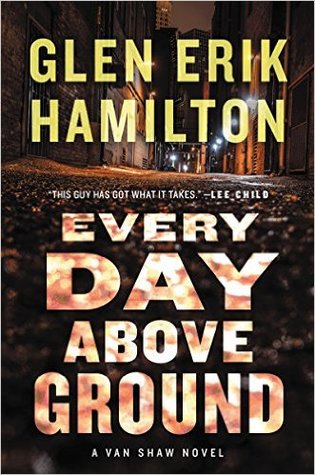 It sounds like a thief’s dream to Van Shaw: A terminally-ill ex-con tells him of an easy fortune in gold, abandoned and nearly forgotten after its original owner died in prison. For the dying man, the money is a legacy to ensure his pre-teen daughter’s future. For Van, the gold is cash he desperately needs to rebuild his destroyed family home.

The grandson of a career criminal who taught him all the tricks of his trade, Van suspects that nothing is ever that easy. Sure enough, the safe holding the fortune is a trap—set by a mysterious player armed with tremendous resources and a lifetime of hatred. Now, Shaw’s partner is in the clutches of the hunters, and the former Army Ranger may be their next prey. But when the ex-con’s innocent daughter is threatened too, Van’s own hard childhood means he can’t let her come to harm.

To discover who has them in the cross-hairs, Shaw must seek out the hunters’ real prey. His quest leads him from an underground bare-knuckle fighting ring, which may be fronting a darker purpose, to a massive pop-culture convention, where Van and his allies, Hollis and Corcoran, play a dangerous game with foes on every side. It also introduces Van to a brash and beautiful aspiring journalist who poses a whole different kind of personal risk.

For years, Van Shaw has tried to live every day above ground, on the right side of the law, even though crime is his gift . . . and in his blood. If he survives the coming storm, he’ll have to decide what he wants—and whether he can live as an outlaw without sacrificing his honor.

Every Day Above Ground by Glen Erik Hamilton is a great crime fiction novel. I instantly liked the main protagonist. Van Shaw is trying to live by the law but present circumstances are making that difficult. He could lose everything he’s trying to build. Then, out of nowhere, an offer too good to be true happens. From there, I was sucked into the troubled mess that Van got himself into…

Plenty of action, suspense, and intrigue are supplied. The plot was enjoyable. I found myself wondering how Van Shaw was going to make it. A criminal who turns into a good guy only to be propelled back into hell is exactly what this book contained. I was rooting for this criminal. Normally, I like the good guys and Van was sort of a good guy. He  wanted to do good. Overall, I recommend this crime/mystery to all readers.