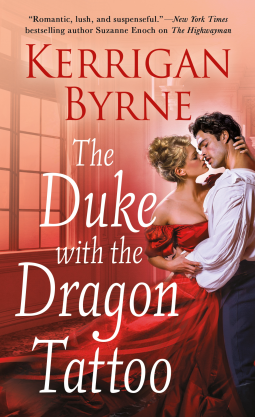 The bravest of heroes. The brashest of rebels. The boldest of lovers. These are the men who risk their hearts and their souls—for the passionate women who dare to love them…

He is known only as The Rook. A man with no name, no past, no memories. He awakens in a mass grave, a magnificent dragon tattoo on his muscled forearm the sole clue to his mysterious origins. His only hope for survival—and salvation—lies in the deep, fiery eyes of the beautiful stranger who finds him. Who nurses him back to health. And who calms the restless demons in his soul…

Lorelai will never forget the night she rescued the broken dark angel in the woods, a devilishly handsome man who haunts her dreams to this day. Crippled as a child, she devoted herself to healing the poor tortured man. And when he left, he took a piece of her heart with him. Now, after all these years, The Rook has returned. Like a phantom, he sweeps back into her life and avenges those who wronged her. But can she trust a man who’s been branded a rebel, a thief, and a killer? And can she trust herself to resist him when he takes her in his arms?

“Byrne is a force in the genre.”—RT Book Reviews

The Duke with the Dragon Tattoo by Kerrigan Byrne is a fun filled historical adventure. A young man goes after a bad man. This leads him to life in prison and where he meets his friends. A group of other men in jail for lesser crimes banding together like brothers. Ash ends up being beaten to death due to switching a cell with a friend. That friend still lives thanks to Ash for that day. Ash is then found by a young woman. She nurses him back to health. They become best of friends…and their attraction grows. Ash has to keep reminding himself to wait…that his friend is too young for where his heart and thoughts take him. Her deceitful older brother ends up taking Ash to a life of misery and hell. Ash fights his way through it all by thinking of his lady friend. Until one day he does find her again…only to find she’s about to marry an old man. Ash’s anger gets the best of him. He kidnaps her and her lady friend. Taking them both to his ship. Ash forces her to marry him. Only his plans keep falling apart…Ash will have to fight again to save his lady. But he must also find a way to gain back her trust. Only then, can he have her heart…

This novel was funny, heartbreaking, and romantic. The intensity of the attraction from both Ash and his lady is engaging to follow. It’s full of sweet and innocence. Two injured and bullied people coming together to form a long lasting relationship. Only it gets taken from them, and as the years grow, they lose each other. The characters were believable. I loved them. Ash had so much hell to go through, I was surprised he lived as long as he did. Overall, I would highly recommend this pirate historical romance to all.