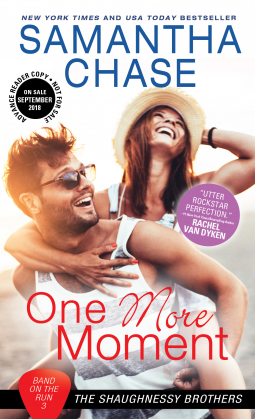 When Charlotte Clark offers to pay for Julian Grayson’s coffee, the world-famous drummer assumes she wants something from him. But Charlotte has no idea who he is, and Julian can’t resist keeping up the charade—being incognito is a novelty and a relief. He’ll have to tell her…eventually. But as Charlotte cheerfully undertakes to transform his life, Julian realizes there’s something about her that gives him what he hasn’t felt in years: hope.

One More Moment by Samantha Chase is the best novel yet in this Band on the Run series. I could not tear my gaze away from the pages. Heat plus, raw emotions, and flaws that make it super easy to connect with the characters, make this a must read. Inside, is a famous rock musician who was badly burned. His ex burned him repeatedly and broke his pride. Julien is so full of anger that his character had this heavy weight constantly keeping him from being happy. Everyone tells him what and how he should live. He’s not ready to let go of his anger. That was until he met, a beautiful kind hearted woman. Charlotte has a way of stunning the drummer. He expects her to ask him for something. Yet she continuously proved she wanted nothing more than to help him. Julien needs to let lose his anger and face his past. Otherwise, his present happiness won’t be his future. And Julien wants Charlotte in his future more than he knows.

Once more, Samantha Chase has created a masterpiece. One that everyone can relate to…as well as remembering way after the last page is read. The characters made me fall in love and root for their happiness. Julien was a stubborn man. That made his fight tougher and more realistic. I liked how he was an average joe, who looked good, and had  a heart of gold despite his wealth and music talent. Charlotte was just an ordinary woman helping the homeless finds jobs. She complimented Julien and was his light to his darkness. Both were strong and independent characters. I cried for Julien’s pain, I laughed at how ridiculous Julien’s jealousy was, and I melted when they had their good moments. I cannot read a book by this writer without my heart and soul getting attached every damn time. Overall, I highly recommend this sexy as hell contemporary romance to all.

2 thoughts on “Review: One More Moment by Samantha Chase”