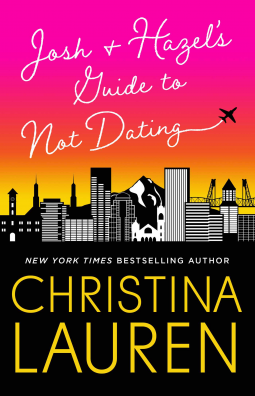 Most men can’t handle Hazel. But her best friend Josh isn’t most men. Don’t miss New York Times bestselling author Christina Lauren’s new novel about two people who are definitely not dating…no matter how often they end up in bed together.

Hazel Camille Bradford knows she’s a lot to take—and frankly, most men aren’t up to the challenge. If her army of pets and thrill for the absurd don’t send them running, her lack of filter means she’ll say exactly the wrong thing in a delicate moment. Their loss. She’s a good soul in search of honest fun.

Josh Im has known Hazel since college, where her zany playfulness proved completely incompatible with his mellow restraint. From the first night they met—when she gracelessly threw up on his shoes—to when she sent him an unintelligible email while in a post-surgical haze, Josh has always thought of Hazel more as a spectacle than a peer. But now, ten years later, after a cheating girlfriend has turned his life upside down, going out with Hazel is a breath of fresh air.

Not that Josh and Hazel date. At least, not each other. Because setting each other up on progressively terrible double blind dates means there’s nothing between them…right?

Josh and Hazel’s Guide to Not Dating by Christina Lauren is the best contemporary fiction novel I have read in a long time. At first, looking at the cover, I thought it was be okay. But it proved me wrong on so many levels. The novel was out of this world good. Stunning, engaging, heartfelt, and well-written…It was super easy to get lost within Hazel’s and Josh’s world. Both were so interesting, that I couldn’t stop reading. I had to know more about both of them. Hazel is the typical ordinary girl who felt like a loser due to her lack of trouble. She is always having some kind of embarrassing thing happen to her. I felt a deep connection to Hazel. She’s full of life. Funny, real, and entertaining to be around…while Josh was kind, clever, and charming. Two completely opposite people coming together in unexpected ways. I loved following their story. Overall, I would recommend it to readers worldwide.