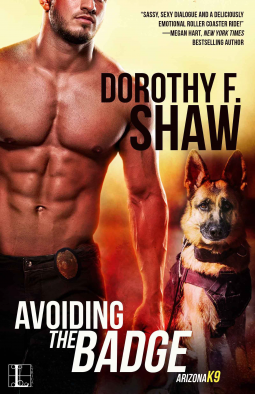 JUST WHAT THE DOCTOR ORDERED

Rayna Michaels may be a veterinarian, but she knows a little something about the human heart—especially when it comes to worried pet owners. Law enforcement’s bonds with their K9 partners are legendary, and Derek Hansen is a perfect example—he’s had his dog Axle in more times than she can count in the last few months. And Derek’s sculpted muscles and heart-stopping smile would be truly irresistible, if only he wasn’t an officer of the law…

Derek can’t get Rayna’s stunning face and no-nonsense smarts out of his mind. Any excuse to see her will do, until he works up the nerve to ask her out. He’s not sure where her resistance to cops comes from, though he’s more than willing to prove he’s one of the good ones. But when casual dating turns into explosive lovemaking, Derek knows he has to come clean about his past before the woman he loves finds out what he’s been hiding and turns tail to run…

Avoiding the Badge by Dorothy F. Shaw is about this sexy as hell officer who took his canine partner to a vet. The vet happened to be a gorgeous woman who took his breath away. Plus, she was sweet. Ever since then, he’s been bringing in his dog to the vet for a check-up just to be close to her.

This felt a bit stalkerish. He meets her and immediately goes, that’s the woman. Mostly because of her looks. This book was all about his sexual lust towards her.  I couldn’t connect with him nor her as main characters.  Then the sex was the main purpose of this book. It was about pain sex. BDSM to be specific. I have read other books with BDSM scenes and felt more like an actual story than this book did. It failed my expectations in the romance department. Was it hot? If you’re into the graphic sex, then, yes. But all I think about was…when was this book going to end. I did not like either character. Okay, so then, the female vet has this issue with officers due to her dad. That was briefly mentioned and yet she took a chance on this officer oozing of lust and sex. He did not have to work hard to get her to have sex with him. Nor did he have to work hard to get her to trust him either. But were too far lost in lust towards the other to even think about real trust. Again, that’s why this book just did not meet my expectations for a contemporary romance.