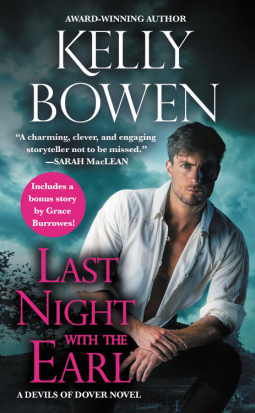 Earl. War hero. Notorious rake. After the Battle of Waterloo, Eli Dawes was presumed dead-and would have happily stayed that way. He’s no longer the reckless young man he once was, and only half as pretty. All he wants is to hide away in his country home, where no one can see his scars. But when he tries to sneak into his old bedroom in the middle of the night, he’s shocked to find someone already there.

Rose Hayward remembers Eli as the arrogant lord who helped her late fiance betray her. Finding him stealing into her art studio doesn’t correct her impression. Her only thought is to get him to leave immediately. Yet the tension between them is electric, and she can’t help but be drawn to him. He might be back from the dead, but it’s Rose who is suddenly feeling very, very much alive.

Last Night with the Earl by Kelly Bowen is historical romance that captures the heart and soul. Here, I got to explore the depths of humanity. How far are we willing to help others? An earl, suffering from war, gets a young boy soldier up on a horse when his fellow friend/soldier points a gun at him. Daring the earl to give up the horse so that his uninjured friend could run away. Yet the earl refuses and saves the boy instead. That day earned him more scars and possible death…Years later, just when everyone assumed him dead, the earl finds his father has died and is now taking up to hiding away from the public. Scarred, damaged, and licking his wounds, the earl is content to leave London’s society. Yet his plans are dashed when he comes back home. The one woman who caught his heart lives and teaches at his home residence. There they banter back and forth until both get their anger, loss, and grief straightened out…friendship builds up and so does the attraction and lust. However, both are too injured to let loose and love. The young female artist and the earl need to forgive, heal, and overcomes their fears.

I loved this novel. Kelly Bowen creates characters that are impossible to ignore. Her scenes are vivid, entertaining, and full of emotion. My heart broke for both protagonists. Their troubles made them three-dimensional. I easily was swept away by their actions, romance, and personalities. Plenty of heat, intrigue, and humor are displayed on the pages. These make it hard to stop reading the book. Overall, I highly recommend Last Night with the Earl to all readers. A discovery of art, passion, and inspiration await in this read.