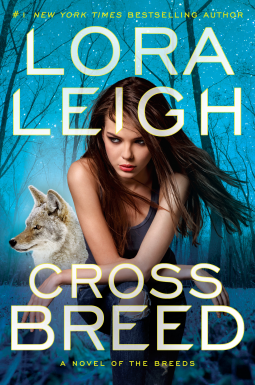 Fans of #1 New York Times bestselling author Lora Leigh’s scorching Breed series first met Cassie as a little girl in Elizabeth’s Wolf. Now Cassie has finally come into her own as a young woman, and she’s about to discover the one she is destined for–but it is unclear whether her fate is to be mated for life, or marked for death…

The Breeds are humans altered before conception with the DNA of the predators of the earth. But although they all carry the genetic material of beasts within them, Cassandra Sinclair stands apart. A unique mix of wolf, coyote and human, she is revered by many–but preyed upon by others. She is fiercely protected by her community…but no one manages to stop her when she slips away one day to offer her body in exchange for her sister’s safety.

The man she succumbs to surprises her by unleashing her inner animal in ways she never dreamed possible–and provokes her deep, furious rage. To Cassie’s shock, he is the mate she has long awaited. She may never be able to forgive his deception. Still, as dangerous enemies track her, and as the threat of all-out war between Breeds and the humans who despise them hovers in the air, they must join forces and hold fast to each other.

Cross Breed by Lora Leigh is an intense paranormal romance tale. I was sucked into the whole Breed and Human world. Scientists took children away from their families only to use their embryos for creating half humans and half animals. Taking sperm from coyotes and wolves the government thought they could create an army to use as a weapon against others. Only it backfired on them in ways they did not expect. Eventually, enough human families had missing family members used and killed for these experimentations. The offspring were not looked at as monsters by the majority of the humans. But that did not mean that others were not disgusted with the Breeds and hybrids.

A young woman, Cassie, is overpowered by the feelings of lust and lack of fear towards a man who first aimed to kill her. He knew she was his mate when he saw her at eighteen. But he never went to claim her until 6-years later. One challenge between, and a night of exotic passion lead to distrust and anger. No matter the danger towards them both, their mating heat keeps increasing and only they can help each other survive its brutal wave.

Dog, aka Cain, is a coyote Breed. But he lets the council who created him think he’s undercover for them. Dog wants to get the info to take them out and destroy them. The council are the ones responsible for creating the Breeds and Hybrids like himself. Anger and loss is all Dog knew until his mate. Cassie gives him hope and tears his world upside down…but he’ll do everything in his power to keep her alive and with him.