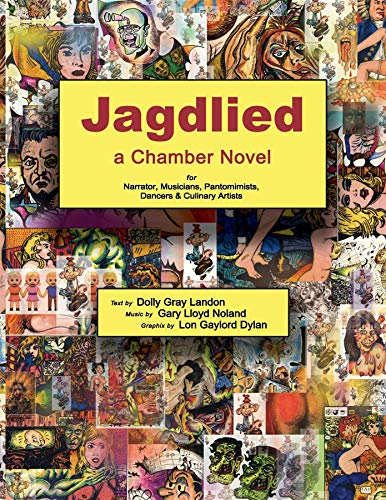 This musically and graphically enriched chamber novel is an over-the-top black and blue comic extravaganza about the conspiratorial undoing of a teenage entitlement princess. The story throbs throughout with an undercurrent of apocalyptic motifs related to the extinction of art, fall of empire, and coming of the Antichrist. It is an epic farce that reads like an erotically supercharged psychological suspense thriller. The narrative takes the reader/audient on a veritable boomerang roller-coaster ride (with multiple inversions) through a reputational strip-and-whiptease of the novel’s malignantly artful (albeit ingenuously doe-eyed) protagonist: a wealthy young heiress and socialite who boasts an exclusive claim to her progenitors’ munificent estate. Her inheritance comprises an immense fortune amassed through shareholder investments in the world’s largest employment recruiter: the multi-national temp agency behemoth known as the Pleasant Peasant Corporation.

A rich repository of tongue-in-cheek nonce words, malapropisms, neologisms, archaisms, spoonerisms, slanguage, and whole swaths of unintelligible nonsense, the text of Jagdlied is also replete with irreverently lurid, salacious, and scatologic elements, which serve to set it in motion as a formidable contender for the distinctive cachet of being regarded (by cultivated aesthetes of omnifarious persuasions) as a momentously serious dirty book. It is targeted towards percipient readers and audients in possession of a well-seasoned sick and—dare it be said—cruel batch of funny bones inflected with a gallows-cum-smoking-room bent.

Whilst the plot of this story (grotesquely absurd as it will undoubtedly be esteemed) embraces reflexively cringeworthy sadomasochistic motifs, its author would hesitate to instyle it as porn, yet he would not be wholly disinclined to characterize it as a farcical parody thereof. And whilst at the same time its author is admittedly predisposed to eschew ascribing labels of any kind to this opus (especially seeing as what he has concocted is so rarefied in its formal structure that it cannot be facilely pigeonholed), it may not be altogether off the mark to view it as a form of literary neurotica (if, indeed, there is such a genre) as opposed to the more boilerplate literotica—or what in sex nazi circles is dysphemistically adverted to (in no uncertain squirms) as “filth.”

Whilst the text of Jagdlied may be read in silence as a novel in the traditional sense, it is ultimately written for the purpose of being recited by a skilled elocutionist to the accompaniment of extemporized music by ad hoc variable ensembles in relatively brief, self-contained or—depending on how one looks at it—semi self-contained episodes with the aid of a do-it-yourself improvisation kit provided in its appendix. This “kit” is likenable to a Baroque-style table of ornaments, albeit comprehending specific sets of chance operations for each and every participant involved in renditions of individual fascicles of this work. Aside from entailing a professional narrator and musical extemporizers, the score discretionarily calls for pantomime actors, dancers (hence choreographers), set designers, culinary artists, and even members of the audience itself.

Jagdlied by Dolly Gray Landon is a thriller novel unlike any other. Its words lead you on a journey that give a unique literary style I have not seen before. I was curious and lost within the pages immediately. The plot was complex. Dolly Gray Landon knows how to write in a way that peaks one’s interest and holds it until the end. The language was a bit bigger than my normal reads, yet it was still a good read. Due to the level of content and words, I highly recommend it for adults only. Although, I can see young adults grabbing this book and hiding away to read it. There was a combination of styles poured into this book. They add to the flavor. Reading this book takes time, but it has so much to offer. Overall, this is a rich, fun, and one epic read.