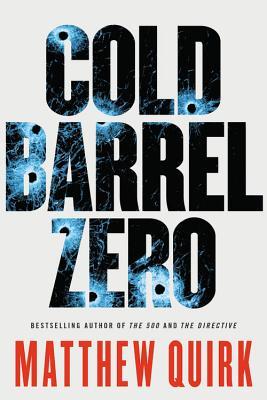 A CODE HIDDEN IN PLAIN SIGHT. A BLACK OPS TEAM THAT WENT TOO FAR.

John Hayes is a Special Operations legend who went rogue on a deep-cover mission and betrayed his own soldiers. Disgraced and on the run, he returns to the United States to get back to his wife and daughter and take revenge on his accusers with a series of devastating attacks.

Only one man can stop him: Thomas Byrne. He once fought alongside Hayes as a combat medic, but he gave up the gun. Now a surgeon, he moves from town to town, trying to forget his past, until he is called upon by a high-ranking government official to help capture the man he once called a friend.

Hayes and Byrne were once as close as brothers, but with the fate of the nation hanging in the balance and nothing as it seems, both men must decide whom to trust–and whom to betray. In a final, explosive battle for justice, they face off along a rifle’s cold barrel.

Cold Barrel Zero brings together the blistering pace of Lee Child, the nonstop action of Brad Thor, and the richly drawn characters and moral stakes of Daniel Silva. An experienced reporter armed with deep behind-the-scenes research into America’s Special Operations Forces, Quirk takes the military thriller to a new level of suspense.

Cold Barrel Zero by Matthew Quirk is a suspenseful thriller. It displays the duty and actions of soldiers who risk their lives for their country. Sometimes, that country betrays them. This plot quickly spiraled from an innocent soldier doing his duty to him being hunted by his nation. Hiding away like a criminal, Hayes, a special ops agent is determined to go after those who betrayed him and his team. This novel has plenty of action, intrigue, and risks to keep me reading. I was entertained. It showed the gruesome reality of what happens that the public isn’t aware of…makes me rethink what really happens to our soldiers.