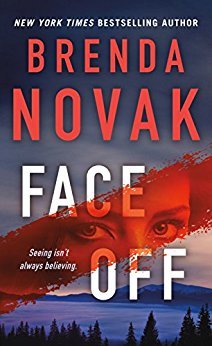 Tortured and left for dead at sixteen, Evelyn Talbot turned her personal nightmare into her life’s work—studying the disturbing psychopathy of some of the world’s most vicious serial killers. Now a leading psychiatrist at Hanover House in a small Alaskan town, she tries to believe the past will never come back to haunt her—until a woman goes missing from a cabin nearby, and every clue points to the man who once brutalized her…

As her boyfriend, who is the area’s only police, begins to investigate—and finds not one but two bodies—Evelyn can’t forget that her would-be killer, Jasper Moore, was never caught. But there are no new faces in tiny Hilltop, no one who seems suspicious or potentially violent. In this twisted game of cat and mouse, Evelyn is certain of only one thing—Jasper must be hiding in plain sight. And if she can’t find him before he comes for her, she won’t be lucky enough to survive twice…

Face Off by Brenda Novak is another brilliant installment to this series. I was intrigued. The entire time, I was waiting for Evelyn’s past killer to attack her. Yet each moment never seemed like the right time for Jasper. Jasper like any other serial killer, ended up making many mistakes. He became careless and it took him spiraling out of control. Everything he worked for, was doomed. The intensity of the big moment, kept me on edge. I was expecting a dark, creepy, and deadly read.

Brenda Novak provided me with just that. The characters were funny, entertaining, and added to the flavor of this read. I had to roll my eyes and bite my tongue at the humiliation that Jasper put up with as he planned his future killings. He hated the men who told him what to do and when to do his work. It was interesting to watch as his temper was pushed and how he barely reined it all in…I kept expecting him to lose his patience at the facility every time. Yet, he surprised me. So many turns and twists…Even knowing the background, I was still kept in the dark as to what would happen. The ending was epic. I would have wanted a bit more darker satisfying end with Jasper. But I will have to wait for the next tale to see what happens next. Overall, I recommend this thriller to all.