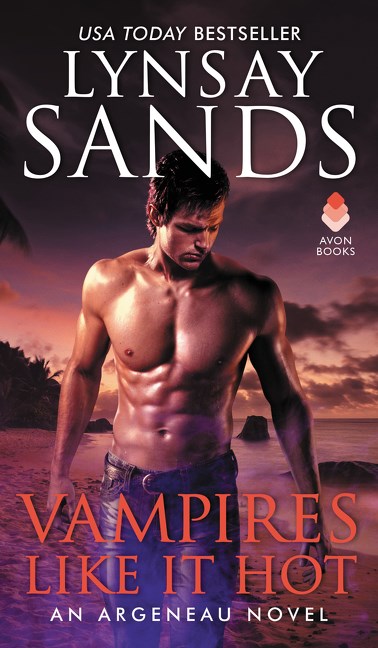 New York Times bestselling author Lynsay Sands brings the heat in this new Argeneau novel, as one woman is rescued by an irresistible immortal

When Raffaele Notte pulls a barely dressed disoriented woman from the ocean, the last thing he expects is for her to utter that word. The immortal has come to the island resort to help his cousin, but now, it seems there are rogue vampires dining on unsuspecting tourists. And he soon realizes that not only is Jess a target, she’s also the life mate he’s been waiting for…

Vampires are real. Jess would’ve never believed it until she saw them with her own eyes. She knows she has to get off the island, and her gallant rescuer has offered to help. There’s something about Raffaele that’s unlike any man she has ever met, and his touch sends pleasure through her that is beyond all imagining. But when Jess discovers who he really is, will she risk life as she knows it for a chance of forever by his side?

Vampires like It Hot by Lynsay Sands is another great adventure. Hot, spicy, and hilarious. The Argeneau vampire family get another fun journey to enjoy. A young woman goes to a foreign tropical island as a wedding retreat with her unlikable cousin. What starts out normal ends up going into a dark and fearful territory.

Jess is and her cousin are lured by pirates. Not just actors dressed up as pirates but vampires needing a blood snack. Jess is overcome by desire that is set from one greasy haired vampire who may be her life mate. But she ends up witnessing a horror scene that leaves her swimming in shark infested waters.  That’s where her other possible vampire life mate finds her. Struggling to swim any further, Raffaele rescues the beautiful human. Only he finds out that she’s running from vampirates and is his life mate. Talk about complex situations and tons of heat. Lynsay Sands delivers an outstanding emotional journey and one packed with action to entertain. I was both laughing and falling in love with the characters, even the greasy haired vampirate with his silly vocabulary.  Overall, I highly recommend this paranormal romance to all.