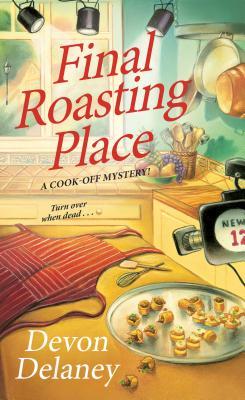 Sherry Frazzelle is back to being Sherry Oliveri, her divorce all but final and her new life in full swing. Her part-time job is helping her father with his hooked-rug business, and her full-time passion is competitive cooking. But murder is about to rock their little Connecticut town . . .

Erno Oliveri made sure to be on set for his daughter’s cook-off appearance on Sunny Side Up with Brett and Carmell. Or as it’s now known, Sunny Side Up with Carmell and Brett–since the ambitious young Carmell seems to have the producer and station owner eating out of her hand. But the important news is that Sherry has bested the competition with her Spicy Toasted Chickpea and Almond appetizer and clinched the spatula-shaped trophy. It’s her shining moment–until everything goes dark.

A quick-moving storm has knocked out power to the studio–and when the lights come back up, Carmell is at her desk with a sharp object lodged in her neck. The weapon is an unusual tool, used by craftsmen who make hooked rugs. Has someone taken corporate backstabbing to a new level, and framed Erno in the process? If Sherry’s going to protect her dad and their family name, she has to find out where he was when the lights went out . . .

Final Roasting Place by Devon Delaney delivers both mystery and humor. I love the way the characters bristle and fight between each other. Each one takes their opinion seriously. Then, there is the father daughter relationship on the pages. Sherry and her father seem to get along. I find it funny how he kept eating other foods except for his daughter’s own dishes. Despite that, Sherry and her dad were charming characters. Sherry is a smart, quick, and talented sleuth. Her fast thinking and observations help solve the murder case.

News worthy stories are just about to get deadly. It might even get worse for Sherry Frazzelle and her father. A cookout show, containing contestants and delicious meals, starts off okay but ends with a big bang. Jealousy, greed, and a fear of change bring out a murderer. The suspects list grows with each page, just as all evidence points to Sherry’s father, another clue proves someone else is the murderer. But who? A race to investigate and find the real killer keeps Sherry’s hands full.

Final Roasting Place offers a lot of entertainment. Action, intrigue, and a bunch of clues as to who may or may not have committed the crime. The cast is enjoyable to follow along. Reminds me of the Murder She Wrote TV show.