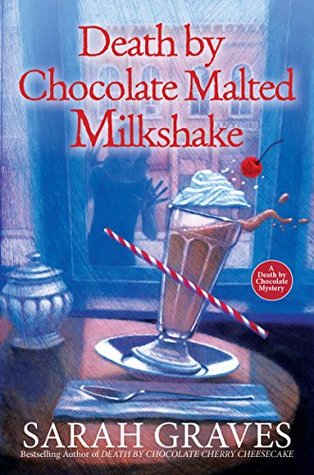 The island fishing village of Eastport, Maine, has plenty of salty local character. It also has a sweet side, thanks to Jacobia “Jake” Tiptree, her best friend Ellie, and their waterfront bake shop, The Chocolate Moose. But when island life is disrupted by the occasional killer, Jake and Ellie put their chocolate treats aside to make sure justice is served.

This summer, Eastport’s favorite lovebirds, kindergarten teacher Sharon Sweetwater and Coast Guard Captain Andy Devine, are getting married. The gala reception is sure to be the fête of the season, especially with a wedding-cake-sized whoopie pie courtesy of The Chocolate Moose. For Jake and Ellie, the custom-ordered confection will finally reel in some much-needed profits. But the celebratory air, and sweet smell of success, are ruined by foul murder.

When Sharon’s bitter ex-boyfriend Toby is poisoned with an arsenic-laced milkshake, Andy is jailed as the prime suspect and the wedding is cancelled, whoopie pie and all. Then Sharon makes a shocking confession—one that sounds like a fishy attempt to get Andy off the hook. Now both the bride and groom are behind bars. And with the fate of The Chocolate Moose at stake, it’s up to Jake and Ellie to catch a poisonous predator before someone else sips their last dessert.

Death by Chocolate Malted Milkshake is a fun cozy mystery. Two ladies with bakery think a milkshake of theirs was the murder weapon. Yet as it turns out…it really wasn’t. But they won’t know that until much later. A man nobody liked is killed. Leaving the main characters worried and in a much bigger hole…than they started with. Jake feels like giving up on their business, while Ellie is still hopeful. But with a local murder to solve things quickly escalate out of control.

The characters were realistic. There was no emotional attachment where I felt like cheering for them. I did feel bad about their sinking business. The plot had mystery. It was entertaining. Just not the omg, I have to finish this tonight or else. Sarah Graves brought themes of family, friends, and intrigue to her novel. It had enough to spark an interest of whodunit and why.