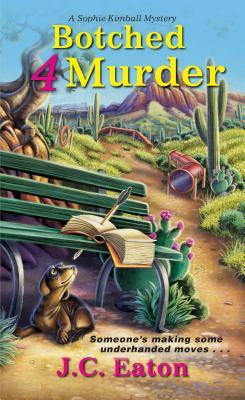 Sophie “Phee” Kimball is getting dragged into the drama again at her mom’s Arizona retirement community. A new board member wants to get rid of two golf courses and replace them with eco-friendly parks, and some of the residents are pretty teed off about it. On top of that, her mother’s book club friend Myrna is being pushed out of the bocce league. These seniors are serious about winning, and Myrna’s dragging them down. She’s so bad at bocce, in fact, that when a community mem.ber’s dead body is discovered while Myrna’s practicing for a tournament, she assumes it was one of her own errant balls that killed the woman.

But before Myrna can be tossed off the bocce court and into criminal court, the police find an arrow in the victim’s neck. It looks like this was no accident–and Phee and her investigator boyfriend Marshall will have to team up to bounce a killer into the slammer . . .

Praise for the Sophie Kimball Mysteries

“An eclectic cast of entertaining characters that will keep you wondering whodunit!”
–Nicole Leiren, USA Today bestselling author of the Danger Cove Mysteries

Botched Murder by J.C. Eaton brings readers to a hot community where the seniors care about what happens to their area. A member of their community takes up a position to have their golf courses changed into entertainment centers for younger people. An outrage breaks out. Many are angry over what the woman started. And it’s not too long before she is found dead. Another member feels that she was the reason the other woman died. But as the investigation continues that’s not the case at all.

J.C. Eaton created a story full of energy. A buzzing senior community that works together to save their area. A young woman and her boyfriend are dragged into the center of the case and issue at hand. Phee’s mother won’t let her daughter and boyfriend be in peace. She is always finding a way to get them to help her and her friends. I found plenty of humor on these pages as well as mystery. The characters felt real. I can just see Phee rolling her eyes and groaning everything she spots her mother and the other seniors. Overall, good story and a plot full of action.