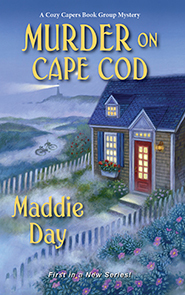 A Cape Cod shop owner and her book club must find a crafty killer in this charming new series from the Agatha-nominated author of the Country Store Mystery series.

Summer is busy season for Mackenzie “Mac” Almeida’s bicycle shop, nestled in the quaint, seaside hamlet of Westham, Massachusetts. She’s expecting an influx of tourists at Mac’s Bikes; instead she discovers the body of Jake Lacey. Mac can’t imagine anyone stabbing the down-on-his-luck handyman. However, the authorities seem to think Mac is a strong suspect after she was spotted arguing with Jake just hours before his death. Mac knows she didn’t do it, but she does recognize the weapon—her brother Derrick’s fishing knife.

Mac’s only experience with murder investigations is limited to the cozy mysteries she reads with her local book group, the Cozy Capers. So to clear her name—and maybe her brother’s too—Mac will have to summon help from her Cozy Capers co-investigators and a library’s worth of detectives’ tips and tricks. For a small town, Westham is teeming with possible killers, and this is one mystery where Mac is hoping for anything but a surprise ending…

Murder on Cape Cod by Maddie Day is an interesting cozy murder mystery. I love book book clubs and this one had a liking for murder mysteries. What the leading protagonist does not expect is for a murder to happen in her safe small-town area. Yet it does. In fact, she accidentally runs over the dead handyman in the fog. It appears he was stabbed with her brother’s knife. All Mac can think about is how Jake died and why. And more importantly who would murder him…

Maddie Day created a mysterious murder mystery with a lot of humor. I couldn’t help from laughing especially, when Mac’s parrot wants a kiss from her boyfriend. It was a perfect blend of action, humor, and danger. The characters made this story come to life. The chief of police and Mac seem to have a history that makes communicating not so much fun. But it was interesting to follow them. Overall, I highly recommend this novel to all. I cannot wait to read the next mystery in this series.