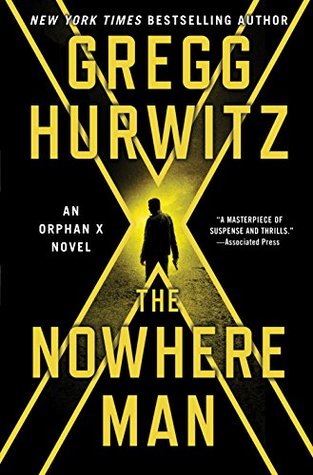 He was once called Orphan X.

As a boy, Evan Smoak was taken from a children’s home, raised and trained as part of a secret government initiative buried so deep that virtually no one knows it exists. But he broke with the programme, choosing instead to vanish off grid and use his formidable skill set to help those unable to protect themselves.

Ambushed, drugged, and spirited away, Evan wakes up in a locked room with no idea where he is or who has captured him. As he tries to piece together what’s happened, testing his gilded prison and its highly trained guards for weaknesses, he receives a desperate call for help.

With time running out, he will need to out-think, out-manoeuvre, and out-fight an opponent the likes of whom he’s never encountered to have any chance of escape. He’s got to save himself to protect those whose lives depend on him. Or die trying . . .

The Nowhere Man delivers another masterclass in hi-octane thriller writing.

The Nowhere Man by Gregg Hurwitz is a splendid thriller. Action-packed, deadly, and comes with risks. I was not sure what to expect. But the story exceeded my expectations. I found myself lost within the book. The pages kept turning and before I knew it, I was finished.

Evan Smoak is known as The Nowhere Man. He comes from nowhere. Helps those in desperate need of a hero. The guy does not have family, has military training, and is extremely likable. I enjoyed following Evan as his journey escalated. Risks are taken every day. There’s no promise of anything. Other than, knowing Evan will be there, if needed. Overall, I highly recommend this exciting suspense title to all.