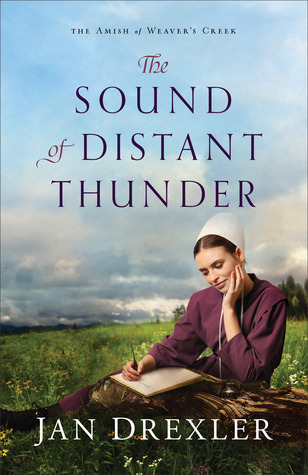 Katie Stuckey and Jonas Weaver are both romantics. Seventeen-year-old Katie is starry-eyed, in love with the idea of being in love, and does not want to wait to marry Jonas until she is eighteen, despite her parents’ insistence. So much can happen in a year. Twenty-year-old Jonas is taken in by the romance of soldiering, especially in defense of anti-slavery, even though he knows war is at odds with the teachings of the church. When his married brother’s name comes up in the draft list, he volunteers to take his brother’s place. But can the commitment Katie and Jonas have made to each other survive the separation?

From the talented pen of Jan Drexler comes this brand new Amish series set against the backdrop of the Civil War. She puts her characters to the test as they struggle to reconcile their convictions and desires while the national conflict threatens to undermine and engulf their community.

The Distant Sound of Thunder by Jan Drexler gives an insider’s view to the realities of an Amish lifestyle. The people are forbidden to live like the outsiders. Violence is not their way of life. However, a young Amish man wants to serve in the military. But he has decisions to make. He has a young Amish woman waiting for his hand in marriage and he has to follow the community rules. Despite what his community says, young Jonas enlists in the army in his brother’s place. I was amazed at the young man’s courage and bravery. He steps up to serve his country and at the same time manages a way to follow his faith. Jan Drexler offers a clean Christian read full of emotions. I recommend this book to readers everywhere.