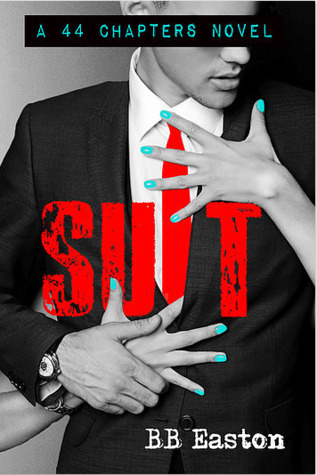 Because BB Easton had so much fun writing her bestselling, award-winning memoir, 44 CHAPTERS ABOUT 4 MEN, she decided to give each of her four men his own steamy standalone. SUIT is Ken’s book—the hilarious, heartwarming tale of how BB finally got over her bad boy phase and found happily ever after with…gasp…a guy in a tie.

“Since when are you into guys in ties? You only like guys who look like they rob guys in ties. At gunpoint.”

It was true. By 2003, my type had been well-established. There might as well have been a giant sign on my heart that said, Good Guys Need Not Apply.

Which is exactly why I had to friend-zone Ken Easton. The man was a former football star, smelled like fresh laundry instead of stale cigarettes, and had more ties in his closet than tattoos on his knuckles. Pssh. BOR-ING.

But the more I got to know my hunky study buddy, the more questions I came away with. Questions like: Why doesn’t he date? Why does he avoid human touch? Why does he hate all things fun and wonderful?

Suit by B.B. Easton is a crazy action-packed romance novel. I was sent from one scenes into another with so much chaos. But there was this deep connection between the two characters. Something drew them together. The guy practically dropped everything to make his woman happy. It was a nice change unlike most stories. However, so much adult stuff. Their language was a little crude, bold, and not my type. Their actions were also the same in most scenes. But somehow I felt compelled to keep reading. I had to know…what would happen. More craziness. And the ending, just weird, strange, and fast. That describes the book in whole as well. It went by pretty quick. My curiosity was captured. B.B. Easton writes in a way that made sure I noticed her characters. I did. I also finished the book in one night. Maybe, it was a little more different to me because it felt like getting a real-life glimpse into the adult romance world versus a hot romance novel kind of vibe. Still a hot read. Overall, it was a good read.