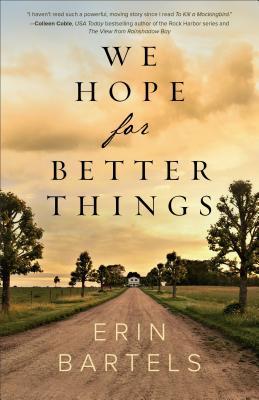 When Detroit Free Press reporter Elizabeth Balsam meets James Rich, his strange request–that she look up a relative she didn’t know she had in order to deliver an old camera and a box of photos–seems like it isn’t worth her time. But when she loses her job after a botched investigation, she suddenly finds herself with nothing but time.

At her great-aunt’s 150-year-old farmhouse, Elizabeth uncovers a series of mysterious items, locked doors, and hidden graves. As she searches for answers to the riddles around her, the remarkable stories of two women who lived in this very house emerge as testaments to love, resilience, and courage in the face of war, racism, and misunderstanding. And as Elizabeth soon discovers, the past is never as past as we might like to think.

Debut novelist Erin Bartels takes readers on an emotional journey through time–from the volatile streets of 1960s Detroit to the Underground Railroad during the Civil War–to uncover the past, confront the seeds of hatred, and discover where love goes to hide.

We Hope for Better Things by Erin Bartels is a one astounding read. This literary debut novel holds so much intensity. I felt the pain, loss, love, and hope. It was like a fresh battle wound that would not fade. A constant reminder of what never died. Still wounds like these exist, today.

In this story, I was swept up into the drama mystery of one journalist’s family history. An interracial marriage…back then, it was not looked upon as happy thing. It was seen as a deterioration to society’s rules. Racism was strong then and still is now. People still fight against one another, white versus black. Black versus white. The pressure and troubles that came with the characters’ choices were seen, heard, and lived through these words. It was like being a witness to such cruel times. Despite the cruelty and difficulty, the characters made the most of what they wanted and had. I have complete admiration for the couple who never backed down…and still had hope. Their love was hanging over me on every page.

Erin Bartels tackled many issues. Important themes that we all needed reminding of. Themes of equality, freedom, race, and love were woven with care. We Hope for Better Things was indeed a perfect title. It summed up what we all hope for each day. Better things…

Overall, I would recommend this beautifully told journey. It is full of emotional baggage and hard times. But it showed how strong victims can be despite their challenges.

ERIN BARTELS is a copywriter and freelance editor by day, a novelist by night, and a painter, seamstress, poet, and photographer in between. Her debut novel, WE HOPE FOR BETTER THINGS, is scheduled to be released in January 2019 from Revell Books, followed in November 2019 with I HOLD THE WIND, which was a finalist for the 2015 Rising Star Award from the Women’s Fiction Writers Association. Her short story “This Elegant Ruin” was a finalist in The Saturday Evening Post 2014 Great American Fiction Contest. Her poems have been published by The Lyric and The East Lansing Poetry Attack. A member of the Capital City Writers Association and the Women’s Fiction Writers Association, she is former features editor of WFWA’s Write On! magazine.

Erin lives in the beautiful, water-defined state of Michigan where she is never more than a ninety minute drive from one of the Great Lakes or six miles from an inland lake, river, or stream. She grew up in the Bay City area waiting for freighters and sailboats at drawbridges and watching the best 4th of July fireworks displays in the nation. She spent her college and young married years in Grand Rapids feeling decidedly not-Dutch. She currently lives with her husband and son in Lansing, nestled somewhere between angry protesters on the Capitol lawn and couch-burning frat boys at Michigan State University. And yet, she claims it is really quite peaceful.

One thought on “Review: We Hope for Better Things”