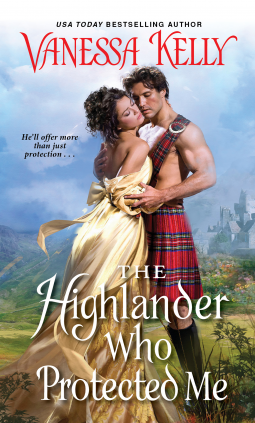 Lady Ainsley Matthews, heiress and darling of the ton, was expected to make a magnificent match. Instead she’s hiding on a remote Scottish estate, terrified that her vicious former fiancé will use her pregnancy to force her into marriage. One man can help her—Royal Kendrick, son of a distinguished Highland clan. Though a mistake drove them apart long ago, Royal is the only person Ainsley trusts to protect her baby—even if that means agreeing to never see either of them again . . .

Scarred in body and soul by war, Royal suddenly has a purpose—caring for an innocent babe and thereby helping the woman he can’t stop loving. But when Ainsley ultimately returns to Scotland, determined to be a real mother to her child in spite of the risk, there’s only one solution: marriage. And only one likely outcome: surrendering to the desire that’s simmered between them for so long, no matter how dangerous it may be . . .

The Highlander Who Protected Me by Vanessa Kelly is was refreshing taste in Highlander romance. This one was similar to so many I have read, yet it so different. There was a new twist to the plot. An interesting turn of events that captured my whole heart in one swoop. The lady protagonist was a nothing like her predecessors. She’s bold, clever, and funny. Lady Ainsley, is a strong independent woman of good standing. An unfortunate event happened and she takes every strength she has to set herself free. Her family is a sad excuse of people. They forced her to be with an abusive man. One that won’t let her go. A highlander warrior has had his sights set on the beautiful heiress. But he knows nothing could happen between them because he’s poor and she’s wealthy. Lady Ainsley doesn’t care. She places them in a predicament and nothing will stop her highlander. These characters have gone through so much yet they never give up. I liked their jokes and their easy banters. Both made this a steamy and fun read.